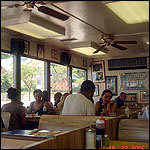 One of us had eggs and sausage, the other the steak omelet. The food was delicious, and piping hot off the grill. Coffee could have been hotter, but was a very good quality DARK ROAST that you almost never see in diners. Service was attentive and friendly, and the coffee just kept coming. Many customers were military guys from the nearby Pentagon. This will be a regular stop on my trips to DC from now on.

Great little Diner!!! I came for the Martin Luther King Memorial and ate here three times during my stay and was extremely happy everytime...I definitely recommend the salads and the chocolate chips pancakes!!! I will be back!!!:-)

Awesome Diner! Live at sienna park apts and go there quite often. Service is pretty quiick and the food is delicous. I love their new spinach salads with bacon!yummy!!!

All there Vegetables fresh HAHAHAHA now that's a good one. Very lucky another Breakfast place has not opened on the Pike. Use to be a great place to go years ago but really has gone down hill the last 10 years. IHOP, Silver Diner, and Metro 29 have much better SERVICE and FOOD.

I have been eating here for 38 years and i know all of their veggies are fresh including the mushrooms. They have really good homemade sausage gravy with buscuits. awesome omelets burgers, steak and cheese...hotcakes, french toast, waffles. all of this 24/7 Awesome!!! Its been there 45 years so they must be doing something right:) I love small little spots like this!

Great Diner...Service is always really good when i go in bob and Ediths, but then again i am not one of those never happy people i see in there sometimes. I love the food and will continue to eat here when i am in the neighborhood!

Bob and Edith's is where I got started with my love affair with S.O.S. around 1980. I used to go daily, but moved to Fredericksburg, so I only make it up a few times a year.

I mostly go for nostalgia now. Though the breakfast is better than most places down here, it doesn't live up to its past (I see too many Sysco containers in the back).

I grew up on 8th and Wayne and would actually sneak out at night and walk down two blocks to the diner and hang out (yeah a 10 year old drinking coffee at 1 in the morning watching the freak show).

As for Spanish speaking people, I don't know what the issue is. Everyone I meet in there is friendly. I would request that any bigots ignore the previous poster's request that you move down this way...I'd rather not deal with you either.

ok. FIRST of all, the two biggoted IDIOTS who keep talking about how "awful" it is that their are hispanic employees at the original original location need to effing MOVE. take your racism to southern virginia...you and the liberal population of northen virginia will like the arrangement much more :P and no, I myself am not hispanic, but I have lived here all my 24 years on this earth, and people like those 2 ignorant d-bags piss me off like nothing else.

NOW, more importantly, Bob and Edith's ROCKS. i order my eggs over medium. everytime. no exceptions. I have eaten at the orignal location probably close to 20 times. and everytime, the eggs are cooked PERFECTLY (runny yolk, whites completely cooked through)! it's amazing! cause let me tell ya, getting perfect over-medium eggs that consistently is a huge culinary feat. secondly, the bacon is perfect everytime. i am a HUGE fan of bacon.

The line can definitely be a huge pain on saturday and sunday mornings, so i would definitely give yourself plenty of time in case you have to be somewhere important after the meal. but if if you can muster the patience, it is definitely worth the wait!

oh. and they're HUGE dallas cowboys fans, and so am I :) so that adds even more points in my book.

I've been a customer since about 1972, at the first location, and since about 2003 at the (now closed) new location. I love the joint. Lining up on Sunday morning for a booth at the original location can be a pain, and the parking is REALLY tough, but if you like diners, you will LOVE this place. I'm going to miss my favorite waitress at the closed location, though. Overall, highly recommended. And ignore the comments of the people who complain about Spanish speakers. If you know restaurants, you will know that the line cooks in the best restaurants (as well as in diners) are ALL Hispanic. They're great.

I am disappointed that their second location closed, but i guess thats what happens when you sell the property. The food at the original location is awesome and the service is always prompt. I would definitely recommend this place to anyone looking for a great cooked to order meal anytime! This place is truly an Arlington landmark!!!!! Its also American owned and operated!

Bob and Edith's Diner located at 2310 Columbia Pike in Arlington, VA is now a NON-SMOKING DINER!!! So bring your family for a cooked to order breakfast, lunch, and/or dinner. Anytime day or night!

Used to pretty good diner food but has been going downhill and service even worse (been going there for about 7 - 8 years). Staff more worried about conversing in Spanish then serving customers. There are better diners out there - Silver Diner much better food and service..although I would rather support a local dinner than a chain, good decent meal will trump. I guess only saving grace is open 24 hours, so if you want a freak show and don't care about food...go there around 2 - 4 AM on Fri/Sat. Basically, this place is over-rated.

I have lived around the corner from B&E's for 17 years. It USED to be great albeit a tad pricey. However, lately it has gone downhill. The food is tasteless and the service spotty. This morning I was served coffee in a filthy cup, the "person" took it back without a word of apology. My breakfast was served, cold without the toast. Now I like to eat my eggs with the toast. Waited over 5 minutes, no toast. Finally I went to the counter and got it straight from the cook. It too was cold. Overall it was the worst breakfast ever. The time before the utensils were dirty.
I will not be returning.

I have been eating at Bob and Edith's Diner for over five years. The food is great, the people are friendly and the prices will not break your pockets. It is the best home cook breakfast food in the VA, MD and DC area. Better than IHOP and the Waffle House combine.

Bob & Ediths is a great place for a quick cup of coffee and a break before heading off for the days work.

If you are a people watcher you get the extra added option of sitting next to the entire spectrum of military folks from Private to General as well as the every day person and even a CEO or two.

It may cost more than your average diner but it is worth the cost to go back in time to a real diner.

If you have not been there check it out. If it is full try due to limited parking try out the #2 Bob & Ediths further south on Columbia Pike.

The best food 24 hours a day, 7 days a week. You can always go there in confidence to get a great meal, with excellent service, and best of all it has an amazingly friendly atmosphere. I really like that you can sit at the counter and watch the cook grills up your food. The second location at 4707 Columbia Pike 2 miles away from the original one is more than 4 times the size with an out dooe patio that serves 75 people. It has an enormous non-smoking section, for the people who really dont like smoke. Lastly, I love to go here on a sunday morning and watch some Washington Redskins football on one of there 4 televisions. So, if you want a great breakfest with exceptional service then head up to Bob and Edith's for an enjoyable experience.

While a bit pricey for a greasy spoon (averaging about $8 a plate), the portions were plentiful. Grits were very good and served in a real bowl, instead of one of these 2 oz hamster feeders. Brown gravy on the chicken-fried steak, though? Must be a VA thing. If you can't stand ciggies, you may want to look elsewhere, as only a 3-foot walkway separates smoking from non-smoking tables.

Have been going to Bob and Ediths over 25 years, excellent food for the price.

A rather good diner on Columbia Pike in Arlington, VA.

It's your basic 24x7 greasy spoon diner, one of those diners that looks like it belongs in a trailer park. Which is good, those sorts of places always have the best diner grub.

The key ingredient here is grease, and a lot of it. But for your basic breakfast items (bacon, eggs, hashbrowns), they know their stuff.

Also go there for lunch, the patty melt is to die for. Also try the peanut butter swirl pie.

Reviews submitted here are meant to pertain to breakfast only. While Mr Breakfast cannot vouch for the validity of each restaurant review, he feels pretty good vouching for the excellent character of the residents of Arlington, Virginia - who are primarily responsible for the review(s) you see above for Bob and Edith's Diner.