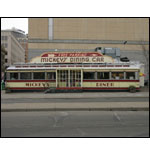 I love mickey's diner & have been going there since 1970. Good food, good service and a great staff. What more do you need?

Wow! Massive breakfast. Had 2 eggs, english muffin, bacon, and potatoes O"Brian which costs extra and contains a massive amount of ham, onions, and green peppers. My meal was cooked perfectly. Coffee was great and plentiful. Saw an omelet prepared and it was massive and fluffy. The pancakes and waffles were intentionally cooked well done. I don't have any idea how they tasted but it wasn't my style and thus the 4-egg rating overall. I am an egg guy so for me this is my new go-to breakfast place in St. Paul. Be advised, this is a greasy spoon in the finest sense of the word.

Food tastes good going down, but don't always feel good the next day. Use a malt machine to make omelets so they are really fluffy.

If there is one quality that attracts me is that Mickey's "IS" always there with Hot Food, Hot coffee and a dependable staff. I am picky about where I have a cup of coffee and Mickey's delivers the "best" when it comes to coffee and quality food. Mickey's is St. Paul's ambassador of goodwill to visitors who come from all over the country to see what "DINER" is all about--So, the next time you are in St. Paul--this is a must for your to-do list----enjoy your coffee--tim

Mickey's Diner is awesome! I always get good service in there! The staff is very friendly. I do have to respond to one of the first commenter's. He is full of baloney! The cops did not attack "innocent" protesters! I am sick and tired of so many idiots trying to re-write history to fit their own agenda! I live in Mpls and I watched most of what went down on TV! Those "innocent" protesters were smashing windows and attacking police officers! Even those who weren't directly attacking the cops were doing everything they could to hinder the cops as they tried to arrest the disorderly protesters!

Overall I love this place! What's not to love about a 24 hour historic diner that's been featured in various films?

However, if you want to get treated well by the staff and not ignored, do NOT go during the day on a weekend. The server is crabby and rude and un-deserving of a tip. Aside from that, you'll have to endure some loud obnoxious screaming child who has parents who don't pay attention to the screaming. Best time to go? About 2-3 in the morning! Best malts made by whom? Well of course, the janitor/dishwasher guy!

The only other negative comment I have about this place is that they had a bunch of nasty robo cops sitting on TOP of the place during the Repulican National Convention. Those jerks assaulted innocent anti-war protesters. Shame on Mickey's for being so pro-war/facist with the cops!

My all time favorite restaurant in Minnesota!! I use to take my grandma-in-law there in the 1980's - her favorite place also. Authetic atmoshere which makes the food taste better. All clientele treated with same respect -and there is some "interesting" people watching going on!! If you have not been there - it is a must see before retiring to heaven.

This place rawks the fried potato hard core. Seriously, their hashbrowns and Potatoes O'Brian are the best ever...

...eat here, you won't be disappointed.

Just visited and loved this restaurant. Recommend this establishment to anyone that wants honest value, and genuine company. Coffee was to die for!! Will go back on our next trip to the cities.

This was my first visit to a true "Diner". My new quest is to visit as many diner's as I can around the country, after watching my favorite Food Network show "Diners, Drive-In's and Dives". I enjoyed Mickeys very much, it was small, old & dingy, but that's what makes it a real diner. I felt like a local. The food was good and cheap, not to mention the staff were very friendly. Next time I am in Minnesota, I will diffinately visit again.

My one and only stop was this fall. The history behind the place is pretty cool! The place was busy and we had to wait a very long time for our food, but that was ok. I liked Mickey's, but it definetly needs a good cleaning. The staff were very friendly and I would recommend it.

We went to Mickey's for breakfast for the first time this morning, and we loved every greasy spoonful. The pancakes and potatoes O'Brien were AMAZING.

How can anyone say something bad about Mickey's. It's a Minnesota landmark. You get what you expect. Really good diner food at a very low price. I prefer the other Mickey's(closer to the Airport, 1950 7th St W) just because I used to live a few blocks away. My wife and I would go there for some late night eats after she finished a 12 hour shift. If you have never been, what are you waiting for?

Mickey's Diner is not only a historic landmark, but also has the best breakfast available in the Twin Cities! Yeah it's cramped, it's warm, and it's usually pretty crowded. But it's definitely worth it. Try the blueberry pancakes! They're amazing!

ISH! Everything was filthy. This place should be condemned or cleaned and remodeled. The food was okay, but not worth venturing into this dump. Stay away from this pit!

last time I ate there was 1978 and I still miss that place. Now that has to be some kind of recomndation. paul t.

As far as diners go, Mickey's has got to be one of the best, and probably one of the better examples of what a diner should be.

Situated smack dab in the middle of Saint Paul, nestled between tall buildings, this diner has been here serving food since 1939. Long enough that it's actually on the National Register of Historic Places, and oozes so much authentic diner ambiance that it's been in quite a few movies (The Mighty Ducks, for example) and at least one Playboy feature.

Open 24 hours like any good diner, Mickey's excels at "diner fare," with burgers and fried potatoes being the staple food. Eggs and omelletes are good breakfast items, and the fried potatoes a mandatory side item.

Reviews submitted here are meant to pertain to breakfast only. While Mr Breakfast cannot vouch for the validity of each restaurant review, he feels pretty good vouching for the excellent character of the residents of Saint Paul, Minnesota - who are primarily responsible for the review(s) you see above for Mickey's Diner.