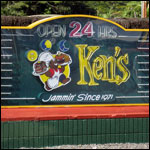 Ken's House of Pancakes
1730 Kamehameha Ave.
At Kanoelehua near the airport
(da planes fly over to salute da
most ono grinds in da islands)

Ken's is great! The menu is huge and everything I have had on it is really ono! The help is very friendly considering how many people are coming in and out. Even when they are really, really busy they will get you seated fast. Make sure you get one of the "sumo" plate's and you'll get the whole restaurant yelling out "SUMO"! when your order's ready!

When visiting Hilo, we stay at Uncle Billy's Hilo Bay and have breakfast here nearly every morning for our two week's stay. It's a place that warms the heart.

This is my spot! I fly to Hilo when I am home in Oahu just for the breakfast. I love everything I've had here. The waitresses are awesome and there isn't much turnover, so it means familiar faces when you come back.

I love the sweetbread french toast.....broke da mouth......:-) Try it with a mixture of maple, coconut, and a dab of the lilikoi syrup for a breakfast experience like none other.

Great food, great service. Haloween night was the best time there. Had a young waitress in a sleeping beauty costume. Bent over to to give me my food and her tit popped out. She just smiled and put it away. The meal was great but even if it was nasty, the service was to die for.

I've eaten here twice over the past 3 years while visiting Hilo. It's always the first place I want to go when I get here. The crab cake eggs benedict are to die for. I just ove their pancakes as well. The fact that you get both pancakes and a starch like hash browns is great. Most places only offer you one or the other with an extra charge for both. Not Ken's, they are generous here with big portions. The quality of the food is impecable.

We live on the Big Island and Ken's is a pretty good place. The sweet bread french toast is wonderful. The 'Sumo' Min is really good if you can handle the kitchen sink sized bowl filled with shrimp broth, noodles, eggs, fish cakes, pork, and cabbage they put in it. They ring a bell and yell SUMO when they deliver it to you.

There is more parking at the building behind Ken's if you have a F-250 like mine or if the lot is crowded. They only serve Pepsi products which is a drag but it is pretty good overall.

Gotta try the macadamia nut pancakes with the coconut syrup! The eggs Benedict were also very good and the hashbrowns were melt in your mouth delicious. The waitstaff is WONDERFUL...all were smiling and seemed like a happy bunch. Our waitress (Theresa)checked on us frequently, but never hovered. My first dining experience in Hilo, recommended by a frequent visitor. I am "paying it forward" by recommending to all.

...This place is for sure the BEST GRINDS EVER... super affordable and they make the best waffles and "HOMEMADE COCONUT SYRUP" to die for... Just off of the banyan drive close to the airport and next to the hilo hotels worth stopin by.... "MmMmMm...."

Best pancakes ever. The fresh made Coconut Syrup is amazing on the macadamia pancakes. Man, I am ready to go back now!!!! Parking is crazy, but we parked at the Y a few blocks down the road. It was worth it!!!

One of the Most Fantastic "Chow Halls" in Hilo, on the Big Island of Hawaii. My kind of "Good, Reasonably Priced Food", quickly prepared and served by a Most Friendly Bunch of People.

The parking lot is small. although the staff is nice. the kitchen is not presentable when your on the counter when you see your food microvawed most of the time. for a 24 hour restaurant its okay. but after 11pm all the customer that you may seen are hundy drunk teenagers that are loud and you cant enjoy your time specially when you have kids.

Kens house of pancakes is an awesome resturant!!! I eat there every chance I have when visiting Hilo. I love to sit at the counter. The waiters and waitresses, including the cooks, put on an amazing "show", extremely entertaining. Delicious foods of many, many varieties are offered and I have yet to experience a bad dish! I especially enjoy the breakfast crew. Witnessing the volume of food that is put on the counter for the wait staff to deliver is awesome, they manuver around each other and manage to be organized at the same time. Comments from others witnessing this agree when we strike up a conversation. The staff appear to enjoy their jobs and I apperciate the warmness they share amongst each other and with their customer's.

sausage and bacon need to be reheated, always cold, even when you request hot breakfast meats they come to the table cold at 8am to 10 am must be they were cooked hours earlier.

Their corned beef hash is the best i've ever had! Good pancakes - nothing special. We had an excellent waitress, and its a very family oriented place.

The food and service is always great! The people are nice and the food is hot. It is a local and tourist favorite alike. I would not miss a trip to "Uncle Ken's" place. Be sure to have the french toast with the coconut syrup and a papaya with lemon. Totally awesome!!!

Everytimre i'm back home in hilo..i have to eat at ken's atleast once..the food is so ono. it broke da mouth...great service no matta what time you go.. mahalo for the great service

Ken's Pancake house is the ultimate BEST!! The service is Great and the coffee is always hot and fresh. The fresh cornbeef hash is 'ono! That's a gotta try for all. There's nothing close to Ken's in Honolulu. It's actually worth buying a round trip ticket to Hilo for breakfast. Anybody who hasn't been to Ken's, gotta go! Its the #1 place for good EATS right when you get off the plane. Enjoy everybody!!

Ken's is the greatest place ever !!! We ate there breakfast and dinner two of the three days we spent on the Big Island. Have recommended it to everyone going to the Big Island and they all feel the same. Their mac nut pie is to die for !!!

I live on the Kona coast of the Big Island and go over Hilo ever so often.. I ALWAYS stop in to eat at Ken's Pancake House! I think it's the greatest place to eat in Hilo.. They have a BIG menu, serving everything you can think of from breakfast all the way to dinner.. None betta!! ONO!!!

Rather rushed at breakfast time because the restaurant is so popular with locals and visitors alike. French toast was not fully cooked, but the Portuguese sausage omelette was to die for. Dinner menu is excellent - can recommend the mahi mahi and the fried chicken. Waitresses were friendly and caring. Highly recommended for a no-frills, good value meal. Will go again on our next visit to Hilo. Parking is limited.

It would be nice if the waitresses would be less fake, and actually show and present themselves as if they like their jobs. I know only two of the waitresses that do a great job. thats 2 out of how many workers???

It is much better to eat there at night because the workers are more pleasant then the morning crew. it seems like the morning workers are only there for the money they so call make.

Best pancakes and omlets in US. Mac Nut Pancakes are to die for.

Breakfast is great but their hamburgers are dry.

Hilo has the reputation of being a no mans land of lousy dining oportunities, a foodie tourist mecca this isnt but the shining exception is Kens. Voted the best Breakfast in Hawaii for years running they serve the best pancakes and other great food at the Big Islands only full service 24 hour resturant. Great service, Non Smoking, and huge menu the possibilities are endless, So come on in and get ready for da best most ono (tasty) grinds (food) on da Big Island, Aloha and Hana hou!!

Reviews submitted here are meant to pertain to breakfast only. While Mr Breakfast cannot vouch for the validity of each restaurant review, he feels pretty good vouching for the excellent character of the residents of Hilo, Hawaii - who are primarily responsible for the review(s) you see above for Ken's House of Pancakes.