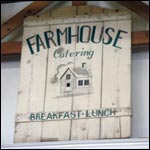 Just went to The Farmhouse today after seeing it on the local morning news, ps previous reviewer I think you went to a different restaurant.They do not take reservation! I know this because I asked. The line was long but moved really fast. The service was very attentive and the food was delicious. Our new favorite by far!

A nice variety of breakfast items. Large portons. A little pricey but what place isn't these days. Friendly efficient service.

I have to admit I never write reviews for anything but today of all days...MOTHER's Day and My dad's birthday all in one. Made a reservation...Yeah like that helped....waited a half an hour after reservation for 5-top and got a 4-top...great, did I mention that I had to sit on the end of the table which happened to be right in the middle of the line for the buffet...yep and the manager's suggestion...wait for it...why not put your baby on the end in her high chair...WHAT!!!! are you crazy...so my 1 year old can get trampled by the buffet line...nope...don't think so..and did I mention how rude she was to my dad...yep...and at the end she tried to apologize to me by basically antagonizing me and trying to make me feel bad for her cause they were busy on Mother's day....I tell you if I wasn't raised better I would have told her where to go and how to get there. I have been to this restaurant many times over the years as I am a native and grew up in Gilbert my whole life, and normally they are fine but don't ever go on a busy day because she can't handle it. maybe she's in the wrong line of work. what a horrible start to a fantastic day. I will no longer go here and hopefully neither will any of my friends or their families either.

How can you mention the place without mentioning the apple pancakes!!!!!! OMG!!!! 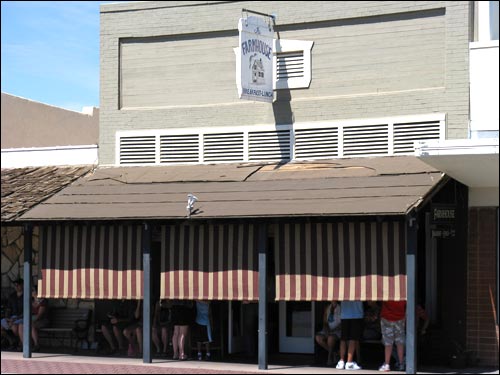 I moved here 3 1/2 years ago. I tried to be guided by the local reviews in the NEWTIMES and AZ REPUBLIC and have found that there exists a food snobbery in this area that overrates some places and ignores others. The Farmhouse does better business than the snobberies because simply it's food is better.

The taste of my omelet probably was the best of any breakfast joint that is privately owned although the Cracker in Mesa is excellent. There is a line on Sunday in fact generally there is a line at every place that serves breakfast on Sunday.

It is just that the omelets here are a notch above other places. 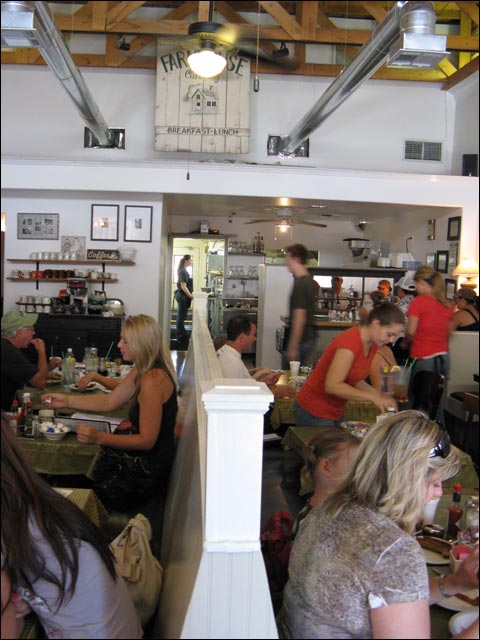 Wednesday's fried chicken dinner is my favorite. Get there early or it will be sold out. Blackberry cobbler for dessert is the ultimate way to top off this meal. Best "home" cooking I've tried since leaving the deep south.
I know this is a breakfast site, but whoever said fried chicken isn't breakfast food?

If you gave Gilbert House the nod over The Farmhouse you need a drugtest. This place rocks. Perfect portions, steaming hot and perfectly prepared. Everything I've had here tastes delicious. And its not your average bacon and eggs. Definately a departure from the staus quo. My last trip I fell in love with the waitress. I'm not kidding she was adorable and I'd marry her in a heartbeat. Perfect proportions! She's no kid either. Will you marry me blondee? Thanks for giving me some of each on the salads. I just couldn't decide.

First let me say that I read most of the reviews and #6535 remarked that some are confusing the Gilbert House with the Farmhouse and that the Gilbert House should get the credit for the "no so good meal" review.

I agree that the reviews are mixed and there may be a negative but I only saw two very positive ones that definitely were talking about the Gilbert House - #12283 and #12902.

My only experience at the Farmhouse was negative. A small wait (no big deal), a dirty chair and sticky table, mediocre food and a very harried rude server.

However, I've often eaten at the Gilbert House. I love the food, the coffee is great and the service friendly. And a big plus for me over the Farmhouse - I've never had to wipe off my chair and table before being able to sit down.

I love the Farmhouse!! Their cinnomin rolls are amazing!! Their B.L.T's are to die for. Fast service and actually to tell u the truth i never waited in line to be seated. The place is just GREAT! ( also for kids their mini burgers are "yummy" as my two year old brother would say).

The Farm House is a charming place with great homestyle food. I had the berry pancakes which were awesome. Be sure to try the freshly made cinnamon rolls. Go on a nice day and sit on the patio. Inside is a bit small and crowded.

Just got back from The Farmhouse, it was fantastic. I read a few reviews before and I agree it hard to find better. The building isn't, as previous reviewer said "just an old building", it is just simply charming! The place was packed yet we still did not have to wait long at all. Our service was excellent not to mention delicious food (or did I already mention that!). Try the yummy Biscuits & Gravy-out of this world. Great coffee too!

The Farmhouse is one of the few places where I'll wait for 45 minutes to eat breakfast. Delicious scrambles, friendly staff, quick service, and the best blackberry cobbler ever. Love it.

I have had breakfast for several years and the food is really good. However, the service is starting to get worse. The younger waitresses are the best and they are at least courteous and polite. The older waitresses are rude, cranky, slow, and need to find other employment.

I'm glad it didn't read your previous reviews before going to the Farmhouse,I may have not and miss a great meal. We enjoyed everything we had for breakfast. Coffee was delicious, but who could go wrong with Illy coffee. The service was friendly and attentive, especially given it was very busy. I will go back again and again!

Never had a bad meal here. Great food, great service! Been going there for 8 years and still have some of the same servers! Don't see that too often. There will be a line if you go on the weekend, but it's worth it. Lunch is awesome too.

The Farmhouse moved from it's original location a number of years ago, like 5 or 6. The Gilbert House is in their old location. It's different from the Farmhouse, but very nice also.

Well, you won't like this one. First there is the wait. Imagine the audacity of some people to like the same restaurant you do... how rude. Other people should choose mediocre restaurants... hehe. And then there is the portions and variety. What the heck is a scramble anyway? These are things I probably shouldn't be liking as much as I do... at least the vegetables are always fresh so that part is simple enough to understand. Also, I like to be grumpy in the morning sometimes and there is nothing worse than being brought right out of it by a smile and general friendliness by everyone... geeesh. Unlike the servers at this resturant, I like my servers tired from not having enough sleep, confused, and distracted, because it is their first job and they would rather be anywhere else. It is simply odd to be served by some of the same people that served you ten years previously in the same restaurant. Where's the turnover? Also I have never sat next to anyone there that I didn't like... what's that about?

this place is kiddie corner from Joes Real BBQ. It is in Downtown Gilbert and a great little place with alot of character. Its NO chain. Home fries cooked with different seasonings. Very good prices but get there early or late on the weekend. two specials offered daily and serves lunch too. Down side would be that there might be a wait as I saw a pad of paper to write your name down when there's a line. The coffee is great!

After reading some of these reviews, I can tell some of the people are confused. The Farm House Restaurant is not under new managment but has moved locations... to 228 N. Gilbert Road. There is a restaurant at the old location...this is most likely who should receive the credit for the no so good meal. I have enjoyed every meal at The Farm House and its sad to see the continued confusion regarding the move. The Farm House has been run by a Mother and Daughter team for many years and hopefully for many more...

The breakfast specials are unbelievable! The artichoke, spinach, black olive and other verggies omelet is to kill for. Top it off with their famous green chili salsa and it gets no better in the Phoenix area!

Big portions here, in an old building giving it some extra atmosphere. The potatoes with the eggs are seasoned really great.
There is a line to get in this place on weekends, it's that good. It's owned by a mother/daughter team where Mom works hard in that kitchen.

Reviews submitted here are meant to pertain to breakfast only. While Mr Breakfast cannot vouch for the validity of each restaurant review, he feels pretty good vouching for the excellent character of the residents of Gilbert, Arizona - who are primarily responsible for the review(s) you see above for The Farmhouse Restaurant.