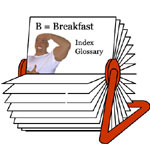 Tuesday, March 11 was a day for American breakfast lovers to hang their heads in shame. "French Toast" was renamed "Freedom Toast" on the cafeteria menus of three Capitol Hill office buildings due primarily to the efforts of two Republican lawmakers.

At this crucial time in our history, we could wish that Representative Bob Ney of Ohio and Representative Walter Jones of North Carolina could find more constructive ways to utilize their time than reverse bad-mouthing breakfast food.

It isn't enough that the whole world is against us on the issue of Iraq. Now key government officials have to engage in verbal playground shenanigans, the results of which will not persuade France to change their policy, but will persuade the French to think that Americans, by association with our leaders, are childish.

Why not change the name to "Stinky French Toast". That's the point, isn't it?

The French are our allies. No matter the dispute, decency and professionalism dictate that our representatives never resort to sophomoric name-calling. If Representatives Jones and Ney had called French President Jacques Chirac a silly name, they would now be issuing apologies for their irresponsible behavior. Just because they found a "clever" way to trash the French does not excuse their actions.

Renaming "French Toast" is something you do in Junior High and on sitcoms. On the issue of renaming breakfast food, these two representatives do not represent me.

In these precarious times, breakfast is about the only good thing happening. From then on, it's pretty much bad news for the rest of the day. Please don't make French Toast a casualty of war.

In defense of French Toast,

Contrary to popular belief, French Toast was not created in France. It was introduced in 1724 by Joseph French, owner of tavern near Albany, NY.

Recipes with "Freedom Toast" in the title:

The editorial content above may not be reproduced without the written permission of Please contact us for reprint requests.
Site Index/Glossary
A|B|C|D|E|F|G|H|I|J|K|L|M
N|O|P|Q|R|S|T|U|V|W|X|Y|Z
Related Terms:
French Toast
Depression & Breakfast
Jams & Jellies
Syrup