The company began in 1972 as an organic farm in the Upper Skagit Valley of Washington's North Cascade Mountains. The first products it sold were jams, frozen fruits and vegetables.

Soon demand for Cascadian Farm products had grown so large, they began contracting with other organic growers in the Pacific Northwest to fill the demand.

The rest of the Cascadian Farm story is quoted here from their official website (as it appeared in 2010):

"In subsequent years, Cascadian Farm worked hard to recruit and train hundreds of other organic growers around the nation and the world, ensuring that the company's products would include only the finest organic ingredients.

"Today, Cascadian Farm has become a leading grower, marketer and distributor of a wide range of delicious organic products, from frozen fruit to breakfast cereal. The company's products are sold throughout the U.S. in natural food stores and select supermarkets." 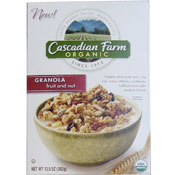