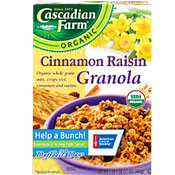 
This USDA Organic cereal was described on the box as "organic whole oats, crisp rice & raisins." Another version of the box slightly altered the description - calling it "organic whole grain oats, crispy rice, cinnamon and raisins."

Company Description: The company began in 1972 as an organic farm in the Upper Skagit Valley of Washington's North Cascade Mountains. The first products it sold were jams, frozen fruits and vegetables... Read on and see all cereals from Cascadian Farm

Upload an image for this cereal
Comments About This Cereal
What do you think of Cinnamon Raisin Granola?
There are no comments yet for this cereal. Be the first! Was it good? Was it bad?
Do you have information not included in the article? Let the world know!