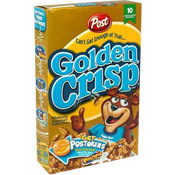 
As with Sugar Crisp and Super Sugar Crisp, the cereal's mascot is Sugar Bear. The most commonly used jingle has been "Can't get enough of that Golden Crisp."

This cereal might be best described using the lyrics of rap song from a 1992 TV commercial:

click to enlarge
1997 Golden Crsip Box - Front And Back

Submitter: Mr Breakfast
Uploaded: 9/25/2008
Additional details
Upload an image for this cereal
Comments About This Cereal
What do you think of Golden Crisp?

Such a delicious cereal.

Love just eating it right out of the box! Can't seem to find it in the Wal-Mart stores lately. What happened?

One of my top 5 favorite! They should sell the milk! One of the best cereal milks to drink! Definitely leaves your urine smelling like the cereal after you eat it. Same thing with Kellogg's Smacks which taste very similar to Golden Crisp but doesn't quite have that texture and hint of honey! I always hated when someone buys Smacks instead of Golden Crisp. Even the Malt-O-Meal version is better than Smacks! Oh don't act like y'all always got the cereal in a box! Some of y'all got them bagged up cereals!

It's really good but always makes my urine smell funny (weird, I know). Does this happen to anyone else?

I'm from corpus Christi as well and could not find the cereal either. I went up to San Antonio hill country big heb still nothing then now as I'm walking thru the cereal isle at Walmart I find it on the shelves - grabbed 2 boxes just in case. I had even bought a bag of the generic that was kind of like it.

I actually looked up a reason as to why Heb and Walmart no longer carries this cereal in South TX. It's madness. I'm going up to San Antonio this month and will look for it there as well.

Not my 1st choice in cereals.(myemptycanvasreviews.blogspot.com)

I am very disappointed that HEB grocery stores and Walmart in Corpus Christi, Texas do not carry this cereal and it is my favorite. Why have they discontinued?