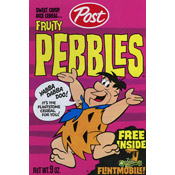 
This cereal was introduced as simply "Pebbles" in 1969. The recipe was a modified version of Post's Rice Krinkles cereal which disappeared about the same time Pebbles was created.

While Rice Krinkes had a definite puffed rice appearance, this new cereal had smaller pieces that actually looked like little rocks.

A happy coincidence happened when the creators of the animated television series The Flintstones sent out word that they were seeking licensing partners. During the first year of the show (1960), The Flintstones was aimed at adult audiences and Winston cigarettes was its biggest sponsor. In an effort to increase its appeal to children and advertisers pandering to children, The Flintstones added two children to it's animated cast, Pebble and Bamm-Bamm.

Three years later in 1969, the characters of the show had no show and no where to go. Little did The Flintstone characters know... they were about to become breakfast cereal superstars.

The new cereal that looked like pebbles and the cartoon that had character named Pebbles was a cereal match made in heaven. In 1970, the name of Pebbles cereal was changed to Fruity Pebbles and the first of many Pebbles variations appeared, Cocoa Pebbles.

It's nearly 50 years since the character of Fred Flintstone debuted and he's still playing a starring roll on Fruity Pebbles cereal boxes. While TV commercials starring Fred and his neighbor Barney Rubble had their heyday in the 70's and 80's, you can still occasionally catch Flintstones characters hawking Post cereals. 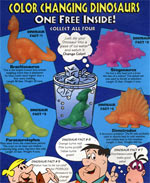 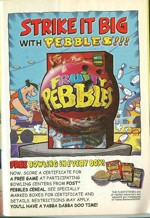 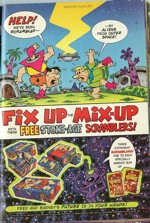 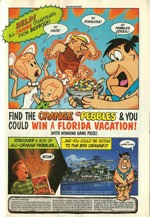 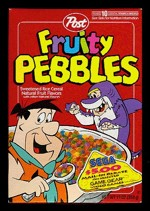 
Upload an image for this cereal
Comments About This Cereal
What do you think of Fruity Pebbles?

My rating reflects the current recipe. My rating for the pre-1984 CLASSIC Fruity Pebbles is a perfect 5!

Growing up, my brother and me weren't close but I remember the small things such as eating cereal together... him with his huge bowls of Product 19 and Cocoa Pebbles and me with my bowl of Fruity Pebbles and just watching movies we'd rent from the store or play a video game. I miss those days but I miss spending that time together now we have families and it's changed but I truly remember this.

Does not hold up well when eaten in a large quantity, but it still has a decent taste for a cereal that's been around for awhile. (I work for a discount store and their version is just as good if not better - and cheaper - hence the okay rating.)

It's odd... As a kid, I loathed this cereal. I thought it tasted like vitamins. But as an adult... I kind of like it now.

By grown up kid

I had some Three Twins Lemon Cookie Ice Cream... which oddly reminded me of the taste of Fruity Pebbles (and lemon-creme cookies). Check it out! I haven't had the cereal in many years now.

Fruity Pebbles was my absolute most favorite cereal when I was a kid and it still is. When I have them now, it gives me fond memories of my childhood, watching cartoons with my sister. Definitely a classic cereal.

I loved Fruity Pebbles as a kid and I still love it today, although I only have about once a year now days.

My Grandson goes through 3 boxes a week.

Back in the late 1990's, O went to the Family Dollar in my town and found the CANADIAN version of Fruity Pebbles which was different from the USA version I've known for years. This cereal consisted of big pebble shaped corn puffs (about the same size as Corn Pops).

Fruity and Cocoa Pebbles still make it onto my breakfast table when they're on sale!