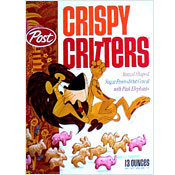 
In the early 60's, the original version of this cereal was promoted as "The one and only cereal that comes in the shape of animals". The sugar frosted oat cereal pieces resembled miniature animal crackers and came in the shapes of camels, rabbits, rhinos and other animals. Later renditions of cereal saw the addition of pink elephant pieces, orange moose pieces and purple "grape ape" pieces.

The cereal faded from the market in the late 60's, but was briefly reintroduced by Post in 1987. The reformulated cereal still had animal-shaped pieces but was now promoted as being the "low sugar cereal with lots of crunch." 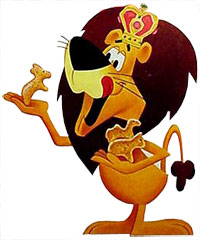 Shortly after this character became the cereal box representative for Crispy Critters (circa 1962), he took the title role in the CBS kids' series "Linus The Lionhearted". The show which premiered in 1964 featured several of the Post cereal box character of the time, including Sugar Bear and So-Hi, the Chinese boy. The program ended in 1969 when the FCC ruled that the show amounted to a 30-minute informercial for Post cereals and violated their dictate that characters on children's shows must not appear in commercial messages during the show.

Orange Moose become part of the Crispy Critters cereal team around 1962-63 when the cereal added orange flavored pieces shaped vaguely like a moose. The character had more than a passing resemblance to Bullwinkle J. Moose, the animated star of "Rocky and His Friends" (1959-1961)" and "The Bullwinkle Show" (1961 - 1964). 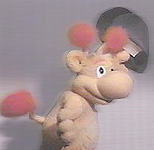 The puppet character, Crispy, appeared when Crispy Critters was reintroduced by Post in 1987. The character had the vocal mannerisms of Jimmy Durante and was known for saying "indubitably delicious" and "Ah-cha-cha-cha". The friendly, furry appearance of the character - along with the fact he had antennae sticking out of his head and a huge nose - has led some to speculate that the character may have been the model for the puppet in the television series ALF, or visa versa.

Late 80's ''My Name Is Crispy'' Crispy Critters Commercial
Additional Images
These are the most recent images. Click here to see all pictures for Crispy Critters. 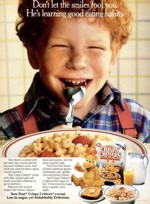 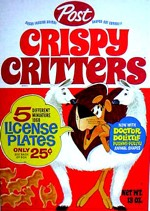 
Upload an image for this cereal
Comments About This Cereal
What do you think of Crispy Critters?

Hey Mr Breakfast, I found a commercial that you can add in the theater.
https://www.youtube.com/watch?v=nBgCB9e5_bA

It was wonderful! Would be great to have it back again!

I just remembered the name and the "Linus the Lionhearted" box. That's what prompted me to search up the cereal, to see if it was still available in some places. I remember having it when I was young, late 60's early 70's from what I remember it was pretty good, but I was more of a Coco Krispies kid.

I miss Crispy Critters. It was by far my favorite cereal. I am an old lady now. Sad.

I ate Crispy Critters when I was a teen, and again in the late 80's when it came back on the market. Loved it and still miss it. My brother had a Crispy Critters card game that played like 'Go Fish'. Wish I had that, too!

All I remember of this cereal were the commercials from 87-89ish. I was a teenager at the time, and while I 'got' that Crispy was supposed to be sounding like Jimmy Durante, I remember thinking even then that most of my friends, and even their PARENTS, wouldn't know who/remember who Jimmy Durante was. I wasn't surprised to see the commercials stop and the cereal disappear soon after.

This was my favorite cereal growing up and I'd love to enjoy it again! Miss it!

Best cereal in the world. I weep with the memory of it knowing that Post will not bring it back.

This is still my favorite cereal. I crave it and I was just born in 1987. We used to eat this cereal all the time! Post, please bring this cereal back. I will buy it continuously! Please?!?