From: General Mills
Introduced in 1965


Original Wackies contained "sweet banana flavor bits" and it was referred to in television commercials as "Banana Wackies".

We aren't sure weather a cereal box with the full title of "Banana Wackies" ever actually appeared, despite the name's inclusion on several cereal lists.

If you have information, please leave a comment below. 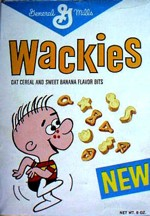 Submitter: TheOpus
Uploaded: 8/20/2009
Additional details
Upload an image for this cereal
Comments About This Cereal
What do you think of Banana Wackies?

This was a cereal my mother loved. It was the only kid cereal we would have to fight her over. It was like Lucky Charms, except the little marshmallow pieces were banana flavored, and the pieces were oat.

Please bring Banana Wackies back. They were the reason I ate breakfast!

Oh how wish they would bring back my Wackies.

Yeah I want Banana Wackies to come back on the market. I wish you would put the cereal back on the shelves.

I'm 49 and I remember these as a kid. They were delicious with an almost overpowing banana flavor. Basically they were banana Lucky Charms. If I had the power to bring back cereals I would chose Banana Wackies and Crazy Cow. On a scale of 1 to 5, these go to Eleven!!!

Ren: Now this, They gotta breeng back man!

Okay this was and if were still around would be my all time favorite breakfast cereal, I so miss them.

I wish they still had that around so I can eat them.