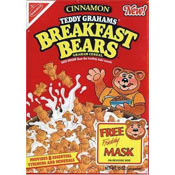 From: Nabisco
Introduced in 1990


This cereal came in honey, cinnamon and chocolate varieties. According to a television ad, they were "burstin' with wholesome graham goodness."

The back of one cereal box described Breakfast Bears like this:

"Nabisco Teddy Grahams Breakfast Bears Cereal is the rockin' bear cereal in fun-to-eat tiny bear shapes. They're specially made so milk brings out their wholesome graham taste. And, they stay crunchy in milk. Try all three flavors: Cinnamon, Chocolate and Honey."

When the cereal first appeared on shelves, each flavor had a different cut-out Breakfast Bear mask on the back.

Teddy Grahams Breakfast Bears was an extension of Nabisco's popular line of Teddy Grahams snack crackers which were introduced two years earlier in 1988. 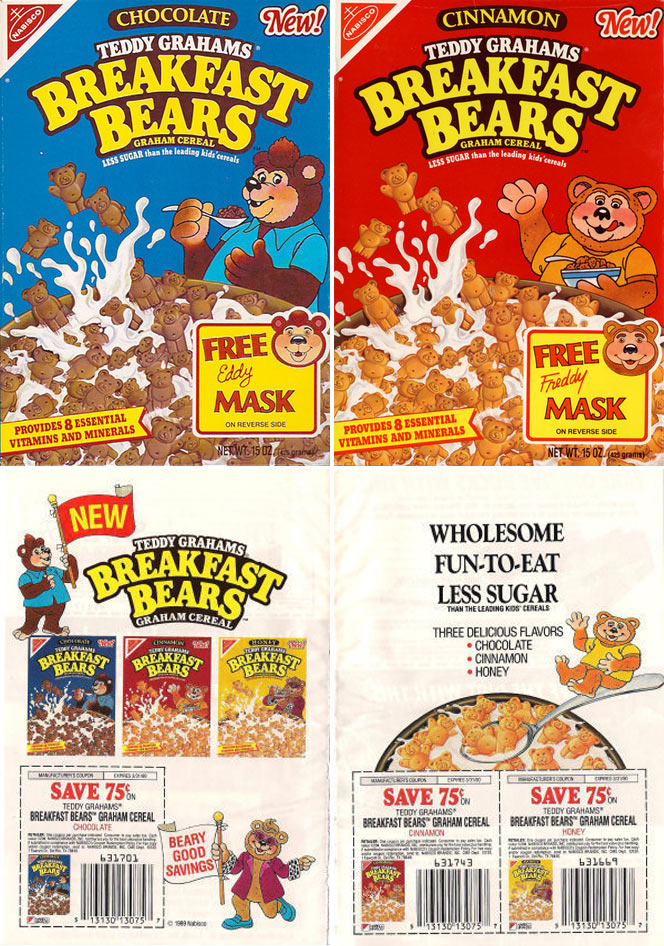 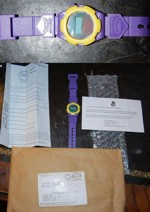 Submitter: jeffrey
Uploaded: 11/29/2010
Additional details
Upload an image for this cereal
Comments About This Cereal
What do you think of Teddy Grahams Breakfast Bears?

Teddy Grahams is among the best and most dear childhood memories. Is it still available?

I remember my good old Breakfast Bears! All three of them were delicious. I loved the little bear mask they gave you. Lots of people I know that remember it say they loved it, they say "can't you just put regular Teddy Graham's in milk"! It gets soggy way too quick. Breakfast Bears was purposely designed to last longer in milk. They were a little thinner and crunchier than the regular TG's. Don't know about anyone else but my Breakfast Bears never lasted in my bowl long enough to get soggy! Honey was my favorite! Nabisco bring back these and Dizzy Grizzlies!

I loved the chocolate Teddy Grahams cereal! I try to recreate it with the regular Teddy Grahams but it's not the same - please bring it back!

The best breakfast cereal I ever tried.

You can eat the cookies in milk - it's the same product as this cereal. I was obsessed with these as a kid.

This cereal was the best best cereal ever made!!

I certainly remember Teddy Grahams Breakfast Bears cereal so well, especially the "chocolate" kind. They looked and tasted exactly like Teddy Grahams cookies, which is what I'll buy one of these days.

I remember the chocolate kind and it got so soggy it disintegrated in the bowl. I still had to eat it...

The flaw that this cereal had, was that it didn't have enough servings.