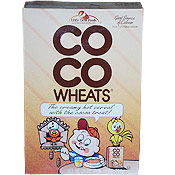 From: Little Crow Foods
Introduced in 1930


Promoted on the box as "The creamy hot cereal with the cocoa treat!", CoCo Wheats instant, chocolate-flavored cereal has been around since 1930. The cereal takes about 90 seconds to make in the microwave and not much longer on the stovetop.

According to the manufacturer's website, " Kids love the warm cocoa taste and moms love the fortified nutrition. CoCo Wheats is now enriched with calcium, something both kids and adults need for a healthy body."

CoCo Wheats is made with wheat farina and what the company calls "pure breakfast cocoa". It was available in 14-ounce and 28-ounce sizes as of 2007. Known premiums that came with this cereal include stick-on tattoos featuring 1930's Navy comic hero Don Winslow and a Wild West Singing Lariat. The instructions printed on the lariat spool stated, "Unwrap string.... whirl around head in a circle. Corkscrew, spiral, butterfly and many more tricks may be made."


Lyrics to the CoCo Wheats jingle:

CoCo Wheats, CoCo Wheats can't be beat
They're the creamy hot cereal with a cocoa treat
to be big and strong, have lots of fun!
eat Co-Co Whe-eats everyone! 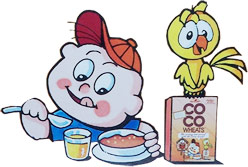 With no official name on record, this cartoon boy represented Coco Wheats on the box, as well as in ads. He was often accompanied by a yellow bird who, in commercials, would commonly mispronounce "CoCo" as "Koo Koo".

In the 70's, human children started to appear on the cereal box, but the CoCo Wheats Kid is back on the box in it's current incarnation. 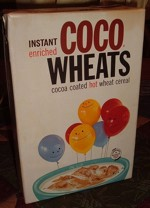 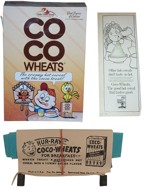 Submitter: Mr Breakfast
Uploaded: 3/13/2008
Additional details
Upload an image for this cereal
Comments About This Cereal
What do you think of CoCo Wheats?


By We want coco

Woco Wheats cereal is back at Mitch's Food Center.

Coco Wheats are no longer available at Mitch's Food Center in Plainview, NE 68769.

Found some! CoCo Wheats is available in Indiana at Meijer's.

We LOVE CoCo wheats cereal! Just had it this morning for our breakfast. Our Walmart now carries it again and we bought two boxes! Love it! Add peanut butter and it's the best!

To find CoCo Wheats in your area, go to https://www.postconsumerbrands.com/store-locator/. I kept waiting for Walmart to stock it again and then found this locator and where to buy it locally.

Someone... make Walmart stock Coco Wheats again! They haven't had it for months and months.

I have been eating this since I was a kid. I buy it at Krogers in Michigan. I pay $3.99 a box. I add a little caramel sauce to make it even better!