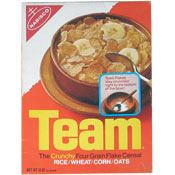 From: Nabisco
Introduced in 1963


This cereal was nicknamed on boxes as "the four grain energy cereal that powers the pros!" and "the crunchy four grain flake cereal." Team made the claim that it stayed crunchier in milk than the leading wheat, corn or oat flake.

The sentence "Team Flakes stays crunchier right to the bottom of the bowl" appeared prominently on multiple boxes.

Team cereal was described in detail on the back of a box in 1977:

"Four grains in every flake. That's why more and more people are switching to TEAM flakes.

"TEAM's four grains give you:

"GREAT TASTE. The taste of TEAM Flakes appeals to cereal lovers of all ages because each crunch flake is a delicious blend of four separate grains - rice, wheat, corn and oats. Together, those four grains give you a one-of-a-kind taste no other cereal can offer.

"NUTRITION. Cereals have long been recognized by nutritionists as an important part of a healthful diet. With each TEAM Flake you get the nutritional benefits of four cereal grains - rice, wheat, corn and oats. TEAM Flakes are also fortified with essential vitamins and iron.

"CHRUNCHINESS THAT LASTS. TEAM Flakes actually stay crunchy in milk longer than the leading wheat, corn or oat flake. That's because TEAM starts with wheat, corn and oats and then blends in lots of crispy rice for long lasting crunch. That's why TEAM Flakes stay crunchier right to the bottom of the bowl!

"Great Taste, Nutrition and Crunchiness that lasts to the bottom of the bowl."

In the late-70's, the word "flakes" began appearing with the title once more. Unfortunately, Team Cereal (aka Team Flakes Cereal) disappeared in the U.S. in the early 90's, shortly before Nabisco was acquired by Kraft. 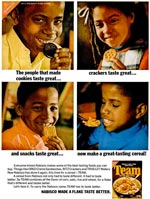 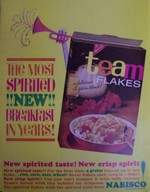 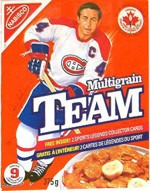 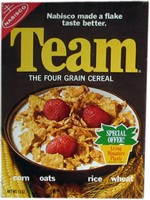 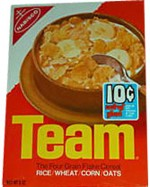 Submitter: susan
Uploaded: 10/31/2008
Additional details
Upload an image for this cereal
Comments About This Cereal
What do you think of Team?

Team was my favorite cereal! I'm craving some right now! Please bring it back. It was so tasty without being too sweet.

I remember this was sold in the UK in the late 1980s with adverts featuring The Flintstones. It wasn't around for long though.

I enjoyed Team greatly for the relatively short time period when it was available here in Canada. I was watching old commercials on YouTube recently and I began to think 'what was that one multigrain cereal that was really crunchy - oh, right, Team!' It was hearty and very tasty, and I think it would go over a treat today if the company that owns the license revived it. Until then, I've hacked my own cereal mix that tastes the closest to it - equal parts Honey Nut Cheerios, Corn Flakes, and Rice Krispies.

Another simple grain cereal that is gone. Hopefully this 'dried fruit' and 'nuts' in cereal phase will pass and they can bring back the simple stuff.

I have been wanting this cereal for years! I looked everywhere and finally realized they stopped making it a long time ago. BRING IT BACK! It was a loved cereal! So great tasting, nutritious, and it really did keep its crunch! There is no other cereal out there as good. Please bring it back!

I am 70 years old this year. Every time I eat cereal, I wish it was Team. I hope they bring it back in my lifetime.

Love this cereal. Please bring it back. I'm waiting!

As I remember these, they were really flavorful without being notably sweet. They really did keep their crunch in milk, and were a real favorite with me and my brothers when we were kids.

By A1 Team Fan

Team Flakes was such a great tasting cereal. WHY did Nabisco discontinue it? A lot of us want it back. It would go over great. It was my very favorite. They should bring it back for a limited time (advertise it to let us know). See how it goes.