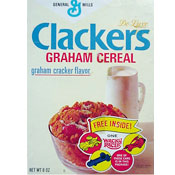 From: General Mills
Introduced in 1968


This cereal had notoriously large pieces shaped like small gears. The large size was indicated by a small subheading of "De Luxe" printed almost subliminally above the word "Clackers".

The flavor was reminiscent of graham crackers. Many people remember the pieces as being too large and crunchy, and almost challenging to chew.

It's often noted that the television commercials for Clackers were far more memorable than the cereal itself. In the ads, seemingly ordinary and occasionally extraordinary events were suddenly interrupted by a box of Clackers being shoved into the scene.

Some of the scenarios:

- An old woman peering into a crystal ball is struck with a box of Clackers
- A baseball picture winds up and reveals a box of Clackers instead of a ball
- A pizza maker tosses dough into the air and a box of Clackers returns
- A vampire tells a girl, "All I vant is your Clackers" and a box suddenly appears
- An alien says "Take me to your..." and is interrupted by a voices saying "Clackers" 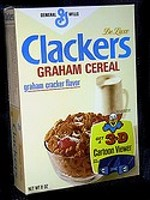 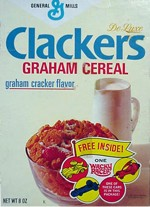 Submitter: Mr Breakfast
Uploaded: 3/13/2008
Additional details
Upload an image for this cereal
Comments About This Cereal
What do you think of Clackers Graham?

I have to correct you. The Clacker Quacker was NOT a whistle. It was exactly what its name implied... it was a yellow and white plastic quacking duck call. I know this for an absolute certainty, because, believe it or not, I still have mine! And, after all these years, it still quacks!

I remember my mom buying Clackers once in the early '70's. I liked it. I doubt highly that General Mills will ever bring it back as it has had so much success with Golden Grahams which tastes identical. The commercials were annoying.

My all-time absolute favorite breakfast cereal. Please bring it back!

Clackers was a great tasting cereal that had only one flaw... advertising. GM did not know what to think of the cereal. If GM had just said "it tastes great" they would still be selling it. It is far superior to Golden Grahams. Too bad GM couldn't see that.

Clackers was the best Graham Cereal period. I've been hoping that General Mills would bring it back for the past 40 years but still waiting. They stopped making Clackers when they started making Golden Grahams. Golden Grahams you must eat as fast as you can or they will get soggy in less than a minute. Not the case with Clackers. Clackers were heartier with more Graham taste with less sugar taste (note on the front of the cereal box showed added sugar put on top of cereal as they were not sweet tasting. Golden Grahams are way too sweet. If Clackers ever come back, I'll buy 2 cases.

This was by far my favorite cereal. I no longer eat breakfast cereal, but would buy Clackers if I knew where to get them. I think my parents hid my Clacker Quacker.

Please bring this cereal back! I miss Clackers!

More than any other sweet breakfast cereal, they stayed crunchy in milk.

Yep! I also remember Clackers as a kid and thought of it several times over the years. It had a great texture, great taste, and better than anything close to graham today!

Had great fun calling people on the phone, and, when they answered, blowing the Clacker Quacker at them, then hanging up!