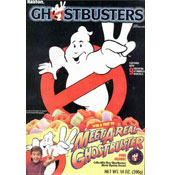 
This sweetened cereal from Ralston with its ghost-shaped marshmallows was a promotional tie-in for the 1989 film Ghostbusters 2 starring Bill Murray and Dan Aykroyd.

Known Premium: Contest entry to "Win a trip to Meet A Real Ghostbuster.

Company Description: Ralston was originally part of The Ralston-Purina Company which was formed in 1902. The name Ralston stems from a minor social movement in the late 19th Century called Ralstonism - created by Webster Edgerly. Followers of the movement (about 800,000) followed the motto "Regime, Activity, Light, Strength, Temperation, Oxygen and Nature" - the first letters of which spelled out "Ralston"... Read on and see all cereals from Ralston
This cereal belongs to the following Mr Breakfast Cereal Families:
Upload an image for this cereal
Comments About This Cereal
What do you think of Ghostbusters 2?

This is one I remember especially liking the taste of. In fact, we probably went through more Ghostbusters cereal than any other brand around that time.

It was very good and went well with the cereals like G.I. Joe, Ninja Turtles, Nintendo and Transformers.

This cereals was not so bad, but the one they need to bring back is Teenage Mutant Ninjas cereal - "T-U-R-T-L-E Power!" :)

How can I get some of your old cereals? I need some Ghostbusters cereal, Nerds cereal and Smurfs cereal. Y'all need to bring them back... Ice Cream cereal too. Cereals these days are awful.