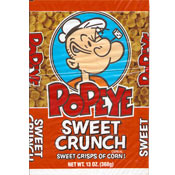 
It was described on its "stay-fresh bag" as "sweet crisps of corn!" The cereal itself was a discount imitation of Quaker's Quisp cereal.

The back of one package described the entire line of Popeye cereals like this:

"Popeye cereals are packed with crispy whole grain goodness for a great tasting nutritious breakfast. Plus they're in stay fresh bags for considerable savings that we pass on to you."

Company Description: The Quaker Oats Company was founded in 1901 with the merger of three oat milling operations in the Mid-Western United States. Since then, the company has expanded operations to include a number of grocery sectors. In addition to hot and cold breakfast cereals, their products include... Read on and see all cereals from Quaker
This cereal belongs to the following Mr Breakfast Cereal Families:
Upload an image for this cereal
Comments About This Cereal
What do you think of Popeye Sweet Crunch?

I used to buy this cereal all the time. It was awesome. At the same time they sold it, I used to buy bags of only dried cereal marshmallows like the ones in Lucky Charms. The store I shopped at stopped carrying them and I never saw them again. Any clue where I can buy them? They only cost about $1.50 or so. Now people sell them $5.00 for 3 oz. That is ridiculous. Any ideas where one might find them today?

This cereal was not an imitation of Quisp. It is the same cereal rebranded. In the mid 90s, Quaker who produced this Popeye cereal, dropped Popeye and just called it Sweet Crunch, then it faded away by the 2000s, only to briefly reappear as Quisp again sold online. Now it's all gone. But quite frankly having tried all varied names of this cereal. I know why Quaker wont' bring this cereal back. It's already there. It's Captain Crunch! Quaker wised up and stopped selling reshaped cereal as they had done over the past 50 years.

If they bring back Popeye cereal... I will finally eat breakfast again!

I loved this cereal as a little kid. I also searched for it as an adult and found the Quaker Oat Crisp cereal. It's not the same. I agree this cereal should be brought back and the recipe used to make it should not be changed. I hate how they have changed the taste of some of our cereals today. I still buy cereal today and lots of it. I have to have at least 5 boxes at all times. Lol! I live in Milwaukee and I go to Illinois just to buy the crisp cereal. Please bring this one back.

This cereal was the same as Quisp. I say that because it was made by the same company.

Please bring it back. It was awesome!

I used to eat Popeye cereal when I was a little girl. They have to bring it back. Please!

Absolutely love the cereal... however. I can never find it in the stores. If I ever found out how I can buy it on the internet and have it shipped and or find it in stores ever again, I would buy it until the day I have no teeth and couldn't chew! Absolutely amazing cereal!

I have 50,000 signatures requesting Quaker bring this cereal back to our shelves... actually I don't, but just bring the cereal back ok!

I love this cereal. I always tell my kids about it. Where can I find it? Please bring it back. Send some to WalMart for a test run. Bring the goodness back!