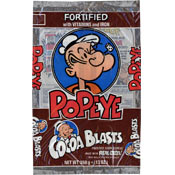 From: Quaker
Introduced in 1993


This cereal was described on the package as a "frosted corn cereal made with real cocoa with natural & artificial flavors."

We've only found this product in an "economical stay-fresh bag" and don't believe it was ever available in a box. In 1993, the bag showed the cereal company as Stokely Van Camp. We have it listed under Quaker because Stokely Van Camp became a subsidiary of Quaker in 1983.

This cereal later became known as Cocoa Blasts without the Popeye branding.

Company Description: The Quaker Oats Company was founded in 1901 with the merger of three oat milling operations in the Mid-Western United States. Since then, the company has expanded operations to include a number of grocery sectors. In addition to hot and cold breakfast cereals, their products include... Read on and see all cereals from Quaker
This cereal belongs to the following Mr Breakfast Cereal Families:
Upload an image for this cereal
Comments About This Cereal
What do you think of Popeye Cocoa Blasts?
There are no comments yet for this cereal. Be the first! Was it good? Was it bad?
Do you have information not included in the article? Let the world know!