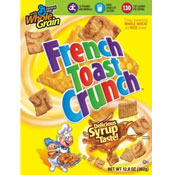 
This cereal was described on the box as a "crispy, sweetened corn cereal" that had a "delicious French toast taste in every crunchy piece!" Originally, the cereal pieces were made to resemble tiny pieces of toast. Later, the cereal pieces became more like the slightly-curved square pieces found in its sister-cereal, Cinnamon Toast Crunch.

The back of one of the original cereal boxes discussed how Wendell, the baking cartoon mascot for Cinnamon Toast Crunch, developed French Toast Crunch: 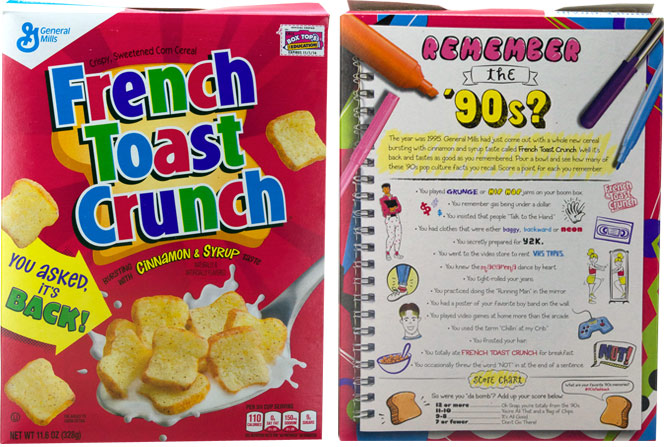 General Mills has relaunched French Toast Crunch. The reintroduction features a retro return to when the cereal pieces (along with those of original Cinnamon Toast Crunch) were actually shaped like little pieces of toast. The front of the box declares, “You asked, it’s back!”

The back of the new box is panel called “Remember The 90s?” and features factoids about what was happening in pop culture when the cereal was originally released in 1995.

I found a box recently and gave it a try. I don’t have a super clear recollection of the original cereal, but I think the maple flavor was more authentic. This new cereal actually says “cinnamon & syrup flavor” not “maple flavor” on the box. Overall, I enjoyed the reintroduced French Toast Crunch. It was pleasantly sweet and the tiny toast shaped pieces have a unique mouth-feel.

The only complaint I have is that when the cereal sets in milk, the pieces resemble broken pieces of Munster cheese as much as they do toast. A bit more tan or speckles of cinnamon (as it seems it would be from the box graphics) would make the cereal look more appetizing.

I would have also liked to see the reintroduction of the cereal’s original mascot Wendall The Baker.

This friendly old baker appeared on several French Toast Crunch boxes. He started his cereal mascot career in 1987 appearing on boxes and in commercials for Cinnamon Toast Crunch.

In commercials, Wendell was often shown as the lead-baker in a three-man baking team. 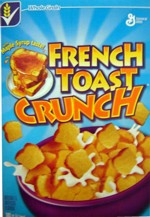 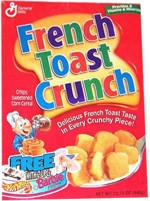 Submitter: carcar
Uploaded: 2/21/2009
Additional details
Upload an image for this cereal
Comments About This Cereal
What do you think of French Toast Crunch?

I always have to have it in my cupboard! I truly love it! God bless you all!

I remember when this cereal came out. I think we might have bought it only a few times. Cinnamon Toast Crunch was WAY better imo. I didn't really like this one. It wasn't horrible, just ok.

OMG... when will it be in WI?! My favorite cereal since I was a child. I need it now!

Its officially back in ROCHESTER, NY. Picked up 4 boxes last night just as they were stocking it at Wegmans.

It is indeed back! I picked up a box tonight at Meijer (the second to last one they had), along with Strawberry Honeycomb, which hasn't been produced in nearly 30 years. It's a good time to be a cereal fan, I must say. :)

They are bringing it back :D. Generals Mills did a soft roll out, and it will be nation wide soon.

Hooray! They're bringing it back!

Where can it be found? Keep looking. Never finding it.

This is my second favorite cereal after Oreo O's.

My kids also love French Toast Crunch. They definitely must bring it back!