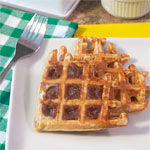 (8 servings)    Printable Version
On the plus side, these waffles have a really nice flavor... lightly sweet and not overly wheat-like. On the negative side, these waffles tend to be a bit limp, especially when compared to waffles made with yeast. It's understandable, considering the percentage of heavier whole wheat flour in the recipe. If you don't mind a limp waffle, these are fine. Although, I would urge you to check out our recipe for Multi-Grain Waffles before making this one. (The recipe on this page was submitted in 2002. It was tested and photographed in October 2014.) 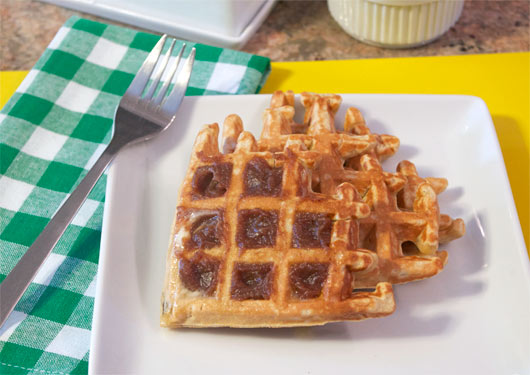 Melt the butter in a saucepan over low heat. Set aside to cool.

Combine both flours, the baking powder, salt and and sugar in a medium sized bowl.

In another bowl, combine the milk, honey and vanilla. Beat that combination into the melted butter. Beat the egg yolks into the butter mixture.

Stir the butter mixture into the flour mixture just until the dry ingredients are moistened.

Use an electric mixer to beat the egg whites until stiff peaks form.

Fold the egg whites into the batter just until blended.

Ladle sufficient batter onto the waffle iron to cover 2/3 of the grid. Use a spatula to spread the batter to the edges. Close the lid.

Cook until the steaming stops (about 5 minutes).

Use a small, stiff rubber spatula to remove the waffle from the grid. Continue with the remaining batter. 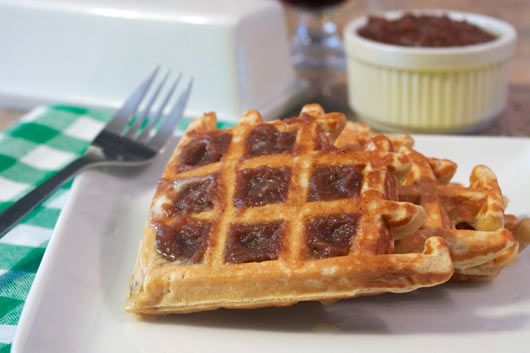 The waffles seen here were served with a homemade date spread.

I opted to use the optional chopped pecans and they were a great addition.

To be safe, I added 2 Tablespoons of canola oil to the finished batter. I don't like to spray or butter my waffle iron and I find that just a little more oil keeps the waffles from sticking without effecting the end result.

You hardly notice the whole wheat in these waffles because of the delicious honey flavor. Depending on tastes, you may wish to add 1/2 teaspoon cinnamon or 1/4 teaspoon nutmeg with the dry ingredients.


Comments About This Recipe
What do you think of Honey & Whole Wheat Waffles?
Overall Average Rating = 4 (out of 5)
Based on 4 votes.

From nstitches
I love this recipe! I top with a warm mixture of PB, Honey, and butter. Then add sliced bananas. The kids love them!

From Jewel
Excellent... made exactly as per instructions added ground flax and blueberries my kids loved them. I thought they were sweet enough even without syrup.

The homemade waffles are going to be less sweet and more wholesome than the frozen ones and it takes a bit of getting used to. They go well with some fruit or a little margarine and/or maple syrup. Knowing what goes into them and knowing they are home made makes a lot of difference for me. And cooking them in the waffle maker with the steam and the way they make the house smell... I've made several batches and I usually freeze them and pop them in the toaster in the morning before heading to work.

From afarnswo
These were just okay for me. I doubled the recipe, and used 3 cups whole wheat flour and 1 cup of white. My complaints are that the batter was too runny. It made it hard to work with as waffles. I did make pancakes with the same batch and they turned out fine, just very thin and flat. The taste was good, though. I liked the bit of sweet the honey adds, and the flavor the wheat added. I don't know if doubling the recipe or adding a little more wheat flour made the difference, but I probably won't try this one again.

From mommaof4
These were very good. Not dense at all but light with the perfect amount of sweetness. My family of 6 all thought they were great!