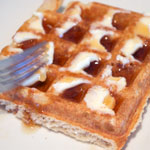 (6 servings)    Printable Version
This recipe made excellent waffles. As a matter of fact, my wife said they were the best waffles that she'd ever had. It was fun watching the waffle batter do it's thing. You leave the (mostly) prepared waffle batter on the kitchen counter overnight. If you check on it, you can see the dough expand from the yeast as the oxygen produced pushes up the plastic wrap over the bowl. In the morning, you stir in some beaten egg and an additional boost of leavening with baking soda and you're ready to make breakfast. I found these waffles very fluffy and light on the inside and pleasantly crisp on the exterior. All in all, it was a very successful recipe test. The waffles seen here were topped with butter, maple syrup and a drizzle of homemade butterscotch topping. (This recipe was submitted in 2007. It was tested and photographed in September 2013.) 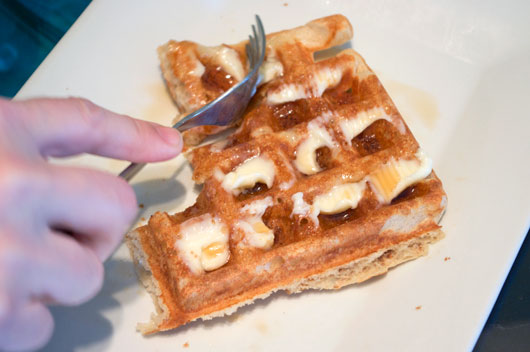 How To Make Yeast Waffles

Warm the milk in a sauce pan over medium-low heat until it's about the same temperature as the warm water.

Cover the mixture and set out at room temperature overnight - at least 6 hours and no more than 16.

When ready to prepare waffles...

Add the beaten eggs and baking soda to the batter and beat until well-combined.

Cook according to the directions for your particular waffle maker. (My waffle maker makes perfectly golden brown waffles if I set the the heat one notch above medium.)

I used a Cuisinart 4-Slice Belgian Waffle Iron to make my waffles. It took about 1 and 2/3 cup batter to make 4 waffles at a time. After dolloping batter in the waffle iron, I used a rubber spatula to nudge the batter to the edges. I cooked on a setting of 5 out of 6. This produced a total of 12 golden brown, delicious waffles. 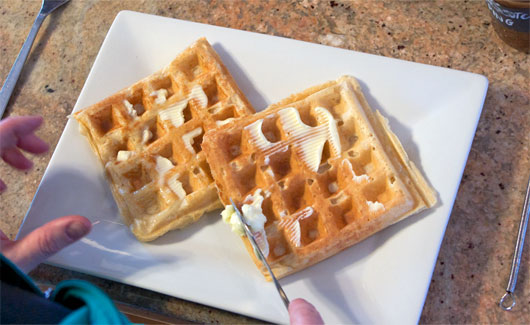 Light and crispy on the outside. Soft on the inside. Not too sweet. Perfect with syrup. Try adding a handful of mini chocolate chips to the batter for a special treat.


Comments About This Recipe
What do you think of Yeast Waffles?
Overall Average Rating = 5 (out of 5)
Based on 3 votes.

From Kremfresch (Team Breakfast Member)
AWESOME recipe. I used one cup skim milk, and one cup full fat plain yogurt (I like a tangy batter), and It maybe could have used a "skoch" more sugar (or even better, vanilla full fat yogurt). Love the way the baking soda kicks it back in gear, and the texture of the finished waffle is great. I used my "T-Fal Avante" waffle iron.

From just yeast
Good but seems a bit odd to add baking soda to a yeast waffle recipe.

Before you let this sit overnight, put it in the sink or else you will have a cleanup mess. It OVERFLOWED my large bowl.

From Gromitdog (Team Breakfast Member)
We just tried this last week, now it's the only waffle my kids want. EXCELLENT!