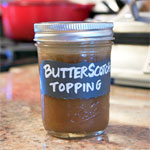 (8 servings)    Printable Version
This recipe makes about 1 and 1/4 cups of butterscotch topping.

Prep: Have an ice water bath ready. You want to cool your topping quickly so it will thicken and not crystallize.

In a small saucepan, melt the butter over medium low heat. With the heat still at medium-low, stir in the brown sugar, corn syrup and salt. This mixture will be hard to stir at first, but it will quickly become thinner and easy to stir.

Stirring occasionally, allow mixture to reach a low rolling boil. (At this point the mixture looks like glossy, smooth Cocoa Wheats hot cereal.) Immediately remove from heat and stir in the whipping cream and vanilla. It will take about 30 seconds of stirring for the cream and caramel to combine.

Transfer mixture to a bowl or large measuring cup. DON'T scrape down the sides of the pan. That's where some of the sugar crystallized and you don't want that in your topping.

Submerge the bowl or measuring cup 1/3 into an ice bath and stir the topping with a spatula until it is thicken and just a notch warmer than room temperature.

At this point, you can serve the warm topping immediately or transfer it to a covered container and refrigerate it for up to 10 days. When ready to use again, just microwave it for about 20 seconds until nicely warmed. 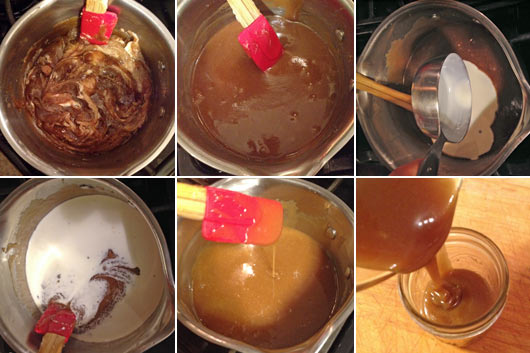 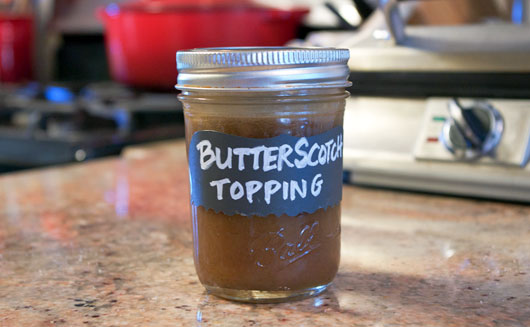 Pancakes are just the beginning. You can use this topping on waffles, French toast and crepes. You can swirl it in oatmeal or with yogurt as a part of berry parfait. In the evening hours, you can use it on top of ice cream or frozen yogurt for an enticing dessert.

You should taste test the topping as soon as the caramel and cream have combined. If the topping has a grainy texture from crystallized sugar, you may have a chance to save it. It was either overcooked or undercooked. Let's hope it was undercooked. Return the sauce to heat and bring it back up it a low rolling boil. Remove it from heat and proceed as written..

Give your pancakes a topping they can be proud of. This sweet, rich, buttery topping can also elevate waffles and French toast to exciting new heights.


Comments About This Recipe
What do you think of Butterscotch Topping (For Pancakes)?
Overall Average Rating = 5 (out of 5)
Based on 2 votes.

From Ashley
Pretty amazing. Although, mine was just a teeny tiny bit gritty. I think my temperature was too high and it cooked too fast. I'm the only one who noticed that though. My husband said I was crazy and that it was perfect.

From H.F. Huff
Great on pancakes in the morning, but even better on ice cream for dessert later in the day. Warmed up good in the microwave too.