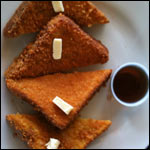 (3 servings)    Printable Version
There's no need to pulverize or the cereal or pulse it in a food processor. Just crush it so the pieces are quite small and fairly even in size. I put the cereal in a plastic baggie and crush it with a rolling pin.

In a shallow dish, stir together the milk, beaten egg, cinnamon and salt.

Spread the crushed cereal over a plate.

Dip each slice of bread into the egg mixture so both sides are fully coated. Then drag each slice (both sides) through the crunched cereal.

Bake for 8 to 10 minutes unto golden brown.

Serve warm with a pat of butter and maple syrup. I also like it with butter and sprinkled with a 50/50 mix of sugar and cinnamon.

You can also use regular corn flakes or similar cereal. Just increase the cinnamon by a 1/4 teaspoon. Enjoy!


Comments About This Recipe
What do you think of Cinnamon Crunch French Toast?
Overall Average Rating = 5 (out of 5)
Based on 5 votes.

From sherpa
Awesome idea. Love it with Cap'n Crunch or granola but no salt. This is good for digestion... but you can change a few things.

From Andy P.
Awesome Idea. I could see using any favorite cereal. I might try with Cap'n Crunch (my fav) next time.

From lissa
I love this recipe! I use whole wheat bread because it's good for digestion and has some vitamins and minerals... I also use Cap'n Crunch, corn flakes, granola or Raisin Bran! Any cereal completes this mouth watering recipe.

From tiff
Yum - so good, I did this but I added granola with the cinnamon toast crunch - and no salt - and with cinnamon raisin bread... so I changed a few things but it was amazing!