The Peace Cereal brand was started in 1997. It's parent company, Golden Temple, is privately owned by a nonprofit organization and was founded by Yogi Bhajan. Golden Temple is also the parent company of Yogi Tea and Sweet Home Farms which produces a line of granola cereals. Peace Cereal is unique in that each year they donates 10% of their profits to organizations working toward world peace or to support community projects.

"At Peace Cereal our mission is to serve you by making deliciously natural and healthy cereal, as well as to serve the world community by utilizing responsible business practices and donating 10% of our profits to peace." 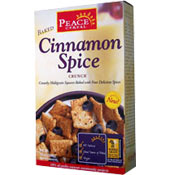