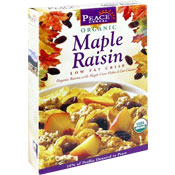 
This cereal was described on the box as "maple corn flakes and oat clusters with delicious raisins." Additional text told us it was "all natural... low fat... (and had) no preservatives." According to a red banner at the bottom of the box, "10% of profits support(ed) community projects."

Company Description: The Peace Cereal brand was started in 1997. It's parent company, Golden Temple, is privately owned by a nonprofit organization and was founded by Yogi Bhajan. Golden Temple is also the parent company of Yogi Tea and Sweet Home Farms which produces a line of granola cereals. Peace Cereal is unique in that... Read on and see all cereals from Peace Cereal

Upload an image for this cereal
Comments About This Cereal
What do you think of Maple Raisin Low Fat Crisp?
There are no comments yet for this cereal. Be the first! Was it good? Was it bad?
Do you have information not included in the article? Let the world know!