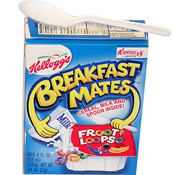 From: Kellogg's
Introduced in 1998


Breakfast Mates were boxed combinations of breakfast cereal, milk and a spoon, similar Ralston Purina's Breakfast On The Run product . Kellogg's launched Breakfast Mates in the summer of 1998 with a $30 million TV and print advertising campaign.

Each Breakfast Mates kit included a single serving of Kellogg's Frosted Flakes, Frosted Mini-Wheats, Froot Loops or Corn Flakes in a plastic bowl, a 4-oz. serving of reduced-fat milk in an aseptic (no refrigeration required) easy-to-pour box and a plastic spoon. The suggested shelf price at the time was $1.29.

Television ads sold Breakfast Mates as a means for kids to make breakfast themselves while their parents slept in or performed other activities.

While the milk in Breakfast Mates required no refrigeration, Kellogg's decided to position the product in the refrigerated sections of grocery stores. This was due to the fact that consumers were not buying into the concept of non-refrigerated milk. Also, breakfast cereal doused with warm milk tasted just plain strange compared to what consumers were use to.

The price tag of $1.29 per single serving of breakfast cereal was considered very high by most consumers in 1998.

In August of 1999 , it was announced that Kellogg's was pulling its year-old Breakfast Mates all-in-one cereal kits from the market due to disappointing sales.

It wasn't anything special.

I would have tried it.

Why would you want to drink milk that wasn't refrigerated?

I used Breakfast Mates cereal during the flood of 1999. It was a great product I thought. I wish I could find some now. If you could help in locating some, email me (tbullock1128@yahoo.com). - Tony

This cereal combo seems gross to me. Who comes up with this stuff. I'm not surprised it didn't last. Ewwww.