Breakfast On The Run 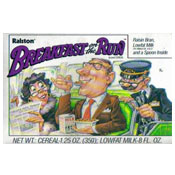 
Breakfast On The Run was a fun, short-lived product from Ralston Purina. Each package was a self-contained single-serving breakfast containing 1.25 ounces of cereal (specially sealed in a disposable bowl), a half-pint of 2% milk in an aseptic box, and a spoon and napkin. There were multiple varieties with different cereals available. Among the cereal options were raisin bran, frosted flakes and Corn Chex cereals.

The packages were designed to look like frames from an illustrated advertisement. They featured scenes of people enjoying a bowl of cereal on the run such as a businessman on a train, boys at a baseball game and a woman eating in an office building elevator.

In January of 1991, the New York Times spotlighted the packaging of Breakfast On The Run in an article titled, "Packaging Becomes Critical in Luring Wary Customers." The piece described the packaging as being an advertisement unto itself, part of a trend where product packaging doubles as a food container and as promotional artwork to draw attention in supermarkets. 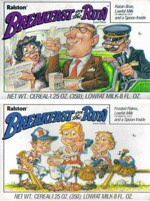 Submitter: Mr Breakfast
Uploaded: 11/14/2009
Additional details
Upload an image for this cereal
Comments About This Cereal
What do you think of Breakfast On The Run?
By angela

It looks cool. Love the drawings on the packaging.