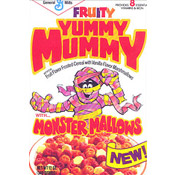 From: General Mills
Introduced in 1988


Yummy Mummy was a "fruit flavor frosted cereal with vanilla flavor marshmallows". The yellow marshmallow pieces seemed to resemble the shape of a head. On some of the cereal boxes, they were referred to as "monster mallows". The other cereal pieces were red and orange. They may have also been intended to resemble heads, but the primarily circular nuggets with two slits in the center looked more like colorful little pig snouts.

Yummy Mummy cereal was the last of the General Mills monster-themed cereals to be introduced. The cereals began with Count Chocula and Franken Berry in 1971. Boo Berry and Fruit Brute came out in 1973 and 1974, receptively. Then more than a decade later in 1988, Yummy Mummy appeared. Shortly after it's introduction, the name of cereal was elongated to Fruity Yummy Mummy.

While most cereal enthusiasts group Yummy Mummy with the other monster cereals, Cereal Mascot Expert Topher Ellis notes that General Mills never officially declared Yummy Mummy to be part it's monster cereal collection. At MrBreakfast.com, we've opted include Yummy Mummy in the monster cereal classification. Yummy Mummy was advertised in commercials with Franken Berry and Count Chocula. The boxes of all five monster-themed cereals shared many similar characteristics.

Unfortunately, Yummy Mummy had the shortest life of any it's monster associates. The cereal only lasted until the early nineties.

In commercials, he had a deep, froggy voice. His jingle featured the lyrics, "Fruity Yummy Mummy makes your tummy feel yummy!" 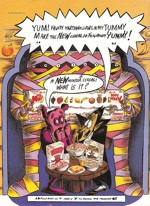 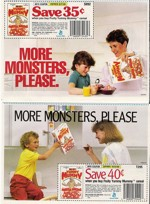 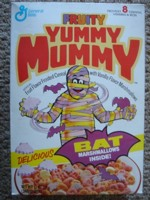 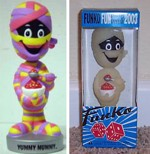 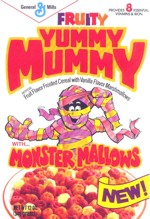 Submitter: diane73162
Uploaded: 6/11/2008
Additional details
Upload an image for this cereal
Comments About This Cereal
What do you think of Yummy Mummy?

MY GAWD! This was the best one of the Monster ceereals... while it lasted anyways. Bring it back for Halloween 2019-2020!

Never had it, but I remember the commercials for it.

Wow, I remember loving the original Yummy Mummy when I was a kid. Probably my favorite cereal memories are eating the Yummy Mummy cereal. I wish they would bring back the original formula/flavor. But the re-release of the Orange and Creme Yummy Mummy in 2013 was still pretty good. Not as good as the original though. Why do all of the good cereals have to be taken off the shelves?

Okay cereal but really could use some more flavor. It seems kind of bland.

My local Walmart has two packs of all five monster cereals for $5.00!

Found a box at Walgreen's. Not too bad. But I still prefer the oat based cereal. I can't find any of the monster cereals at Target or Wal Mart. Looked all over the store. Kmart has them though.

FYM is back! It tastes just like I remember it so at least to me it is the original flavor.

I would say that Yummy Mummy was definitely a monster cereal since Count Chocula and Franken Berry were in the commercial. By the way, both Fruity Yummy Mummy and Frute Brute have been re-released by General Mills for the 2013 Halloween Season. It's not the original recipes but still a fun trip down memory lane. Check Target for the retro boxes of all five monster cereals!