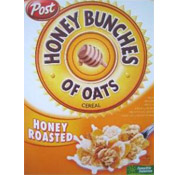 So how did they come up with the idea for this amazing cereal?

Vern had a big idea! Vernon J. Herzing started working for Post Cereals in 1951, as a summer student working in the factory. He joined Post full-time in 1960 and, in 1976 was named a facility manager in Battle Creek, Michigan. Vern wanted to create a product that combined cereals from one of Post's facilities - where in 1986, we manufactured C.W. Post (a granola-based product), Toasties, Grape-Nuts Flakes and Sugar Sparkle Flakes (a frosted corn flake product). He wondered if, by combining these different cereals, he could create a new product - one that would outsell all the others. One Saturday afternoon at home, Vern asked his 18-year old daughter Kimberly to help him prepare different cereal mixtures. They weighed and mixed the different components of cereal and began to sample the combinations, ultimately picking a favorite.

Battle Creek Cereal? The next step was to figure out what to call the product. First, the Post team came up with "Battle Creek Cereal", but research showed that many consumers didn't like the name, although the product itself earned top marks. At the time, no cereal on the market offered those kinds of mixtures. So the team presented their dilemma to Eva Page, a Post brand manager. Eva tasted the cereal and said, The cereal is exactly what it looks like, granola and flakes." She took another bite and then asked, "To make it more exciting, can you put honey in the granola? And the granola is made with oats, right? So," said Eva, "the concept is Honey Bunches of Oats and Flakes." This time, consumers loved the name, and wanted to know where they could buy it! The project was back on track, with a product officially dubbed Honey Bunches of Oats. Later Eve asked, "How can we make it more of an all-family cereal?" The research team suggested adding Post Sugar Sparkle Flakes to the blend, a solution that provided some sweetness to the taste.

Finally, it all came together! After three years of development - most of the time spent searching for a concept - Honey Bunches of Oats cereal hit the market in 1989. During its first year, the product garnered an impressive share of the total cereal market, and was considered a runaway success. Honey Bunches of Oats cereal has grown to become one of the top-selling cereals in America today.

Early Honey Bunches Commercial
Upload an image for this cereal
Comments About This Cereal
What do you think of Honey Bunches of Oats: Honey Roasted?

My go-to cereal ever since I was a kid and still now that I'm grown. The best cereal there is - the bunches are the best!

@Bigbill, are you eating the same cereal that the rest of us are? Honey Bunches has loads of flavor. It is one of the most delicious cereals on the market.

I tried it for the first time and I am not happy. I feel it was a waste of money. Had a real good smell to it, but once I added the milk. There was not flavor - just the taste of plain bran flakes. Sorry.

I love Honey Bunches of Oats. It's the best cereal I have ever had! :)

The first time I tried Honey Bunches of Oats, it was like, where have you been all my life. It was crunchy, sweet and best of all very delicious.

The cereal is okay but I have to put a lot of additional sugar in it.

Best cereal ever! I buy it regularly.

This is the BEST CEREAL EVER. It's the first cereal I ever remember (other than maybe Honey Nut Cheerios). I alternate between two cereals each morning and this cereal is always one of the two.

Fantastic. Being a diabetic this puts the right touch on a cereal low in sugar yet delectably delicious to the taste buds. Surrounded by a wonderful team approach this breakfast cereal is truly a hit. Thanks Post!

This is the best cereal I ever ate. It's genius!