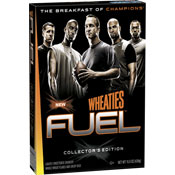 
This cereal spent it's first few months of existence as Collector's Edition cereal. After it was unveiled in September of 2009, it was available in a limited edition box through an offshoot of Wheaties.com called "Evolution". The cereal rolled out to grocery stores in January of 2010. The cereal is made up of crunchy whole wheat flakes with granola and crispy rice - lightly sweetened and flavored with cinnamon and honey.

Wheaties Fuel is unique in that was heavily promoted before it was actually (officially) created. Visitors to the Wheaties Evolution website were shown video clips of the cereal at various stages of development. These webisodes followed a select group of athletes as they helped to help create a cereal designed especially for athletes. Team Fuel included football player Peyton Manning, basketball player Kevin Garnett, baseball player Albert Pujols, triathlete Hunter Kemper and decathlete Bryan Clay.

The following is an excerpt from a General Mills press release dated September 9, 2009:

The new Wheaties, a lightly sweetened, crunchy whole wheat flake with granola and crispy rice and a touch of cinnamon and honey, features long-lasting energy from whole grain to help keep you going and 100 percent of the Daily Value of five B-vitamins to help the body release energy from food. Starting today, collector's edition boxes of the cinnamon honey crunch-flavored Wheaties FUEL are available for purchase online at www.Wheaties.com/evolution, while supplies last. Beginning in January, Wheaties FUEL will be available at your local retailer.

Wheaties FUEL is designed to help power athletic performance and each serving includes: 200 calories to kick-start your morning; whole grain for long-lasting energy; 100 percent of the recommended Daily Value of five B vitamins to help your body release energy from food; 5 grams of fiber to help curb hunger and keep you feeling full, as well as calcium & vitamin D to help promote bone health.

Wheaties FUEL will not replace the Original Wheaties. Together, the two products will make up the evolved and expanded Breakfast of Champions product portfolio.

The championship athletes selected for this project, Clay, Kemper, Garnett, Manning and Pujols, have all previously appeared on the original Wheaties box and are well recognized as champions both on and off the playing field. This panel narrowed the selection to three possible cereal formulas, and everyday athletes helped choose the final product. A six-part web series that chronicles the development process of the new Wheaties Fuel is available for viewing on www.wheaties.com/evolution. From Dr. Ivy`s first meeting with the participating athletes, to discussions about what it takes to become a champion, the webisodes serve as a behind-the-scenes guide, culminating with a trip to a General Mills plant in Minneapolis.


The back of the cereal box in January 2010 described Wheaties Fuel like this:

Fuel up. Be ready. Go. Keep going. For the thrill of winning. Wheaties teamed up with today's champions to co-create a new breakfast cereal. Engineered to deliver long-lasting energy to help fuel your wins. By champions. For champions. Wheaties Fuel. For your wins.

Wheaties Fuel Cereal has been reviewed on MrBreakfast.com. 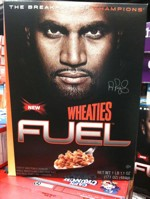 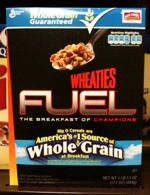 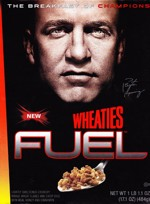 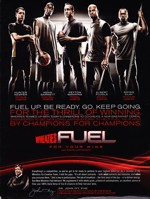 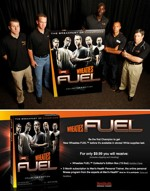 Comments About This Cereal
What do you think of Wheaties Fuel?

Bar none, the best cereal EVER.

I am the digital artist who along with Paul Aresu Photographer, worked on bringing the photos to life. It was a great launch and loved the cereal. I would love to see it come back!

By Fuel Me Up

Please bring this cereal back. I used to eat it every Sunday with my dad and it's my favorite cereal of all time.

I used to have a bowl of this every morning before swim practice. I was so devastated when I could no longer find it on the shelves. What I wouldn't give to have another bowl of it... Please bring it back General Mills!!

I am so disappointed this cereal is no longer produced. One of the better cereals I've had.

This cereal was awesome! My kids loved it. General Mills, you dropped the ball on this one. Please bring it back to the shelf.

Wheaties is very good cereal, but Wheaties Fuel is by far the best cereal General Mills ever made. Off the CHARTS!! Bring it back to the market.

Now THERE ARE NO WHEATIES on shelves at all in the mid Florida area (Tampa Bay). We would load up on regular Wheaties at Walmart. My mom eats it to get down medicine, and I got hooked on them because they aren't all sugary and are good fiber etc. So, NONE at PUBLIX, or anywhere else we checked. I guess the government is not going to help out General Mills! IS THIS THE END FOR WHEATIES and all of its offspring?

This was my favorite cereal and now I can't find it. Please bring it back NOW!

This was probably the best cereal Wheaties ever came out with. It was incredibly good tasting with great nutritional value. Why is it no longer available?