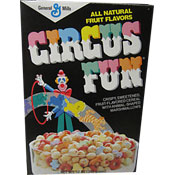 From: General Mills
Introduced in 1986


This cereal was described on the box as a "crispy, sweetened, fruit-flavored cereal with animal shaped marshmallows". The initial cereal pieces were horses, hoops, balls, bears, elephants and lions. Orange tiger marshmallows were later added. 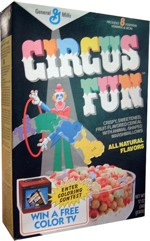 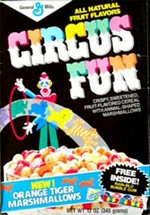 Submitter: leprican_katie
Uploaded: 7/17/2008
Additional details
Upload an image for this cereal
Comments About This Cereal
What do you think of Circus Fun?

My Daughter and I always ate this cereal. She loved it. Too bad it is no more.

Circus Fun Cereal. There are horses, hoops, bears, balls, elephants and lions. It sure was circus fun for breakfast. The marshmallows were my favorite.

Best cereal ever. Like Froot Loops mixed with Trix and Lucky Charms marshmallows, but better somehow. Maybe it was the theme. Yeah it was the theme. I love cereals with clown mascots, and this is much better than Kaboom.

I don't know if I ever even had this lol. But that commercial was ALWAYS on and it was a weird one.

Best cereal ever! I wish GM would release this again, or just make another cereal that tasted EXACTLY the same!

This cereal was AWFUL. For all the hype about it having so many marshmallows, you'd think you'd be getting something really tasty, right? WRONG. The marshmallows were always stale with no taste and the cereal pops had an odd and unappealing flavor. Not surprised this cereal was quickly yanked from the shelves.

Man, this had the best cereal jingle ever: horses, hoops, balls, bears, elephants... (wait for it...) and lions (weird lion voice)... The Best!

This and Teenage Mutant Ninja Turtles cereal were my two favorite cereals ever. I was very upset when this went away so fast The chemists in their lab kitchen had actually made something that was not just a cheap copy of other stuff with these two. The generic clown and poor commercials helped it die quick I think.

I totally forgot about this one... mmm it was good.

We need to bring this back with a petition. General Mills just brought back French Toast Crunch. So it might work.