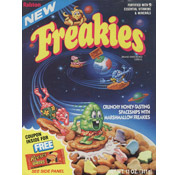 The cereal pieces were Cheerios-esque loops with a flavor reminiscent of Quaker's Quisp cereal.

The cereal was an instant success when it launched. This was due mainly to the bump-covered monsters called the Freakies who appeared on every box.

In alphabetical order, the Freakies characters were:
As the commercial story line goes, the Freakies searched for the mythical Freakies Tree which provided an endless supply of Freakies cereal. Once, they found the tree, they decided to live there forever.

The first time the Freakies were seen on a cereal box, they had already found the tree. Subsequent commercials backtracked to tell the legend of the Freakies Tree.

Fun Fact: All the Freakies characters were based on actual people who worked with the copywriter who created them, Jackie End of the ad firm Wells, Rich, Greene.

A chocolate version of the Freakies called Cocoa Freakies was introduced in 1973. A fruit version called Fruity Freakies hit stores around 1975.

All of the Freakies cereals disappeared from shelves around 1977.

In 1987, Ralston tried to bring back Freakies cereal. The new incarnation was described as "crunchy honey-tasting spaceships with marshmallow Freakies". The Freakies character, who had become more glossy and 80's looking, were all shown riding cereal-piece surf boards in space. The new space Freakies didn't fly with consumers. The cereal was discontinued the following year.

There's a website dedicated to Freakies called freakies.com. Another site (found here) has put together a collection nearly every Freakies box ever produced.

1974 Freakies Commercial
Additional Images
These are the most recent images. Click here to see all pictures for Freakies. 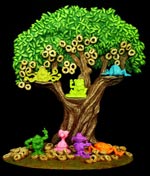 
Upload an image for this cereal
Comments About This Cereal
What do you think of Freakies?

I don't remember the taste other than I liked it. But I remember loving the commercials... and I had all of the figures. Dad had to disassemble the bathroom sink trap to rescue my Grumble. Saved the day! What happened to the display stands that are shown in the photos? I want to buy one.

This and Quisp were the best. I wish they'd bring them back again.

I still have my little plastic Freakies characters that I sent away for!

Original Freakies were one of the crunchiest, best tasting cereals I ever had during my childhood. I remember sending away for all of the plastic character figures - it seemed like I waited an eternity for them to arrive! I wish I still had them today - but not as much as I wish I could enjoy a bowl of that Original Freakies! Come on Ralston! Bring it back for us children of that magical era!

I miss Freakies. It was so delicious. Bring it back and let a new generation enjoy it.

My brother and I bugged our Mom for weeks to buy this and finally she did. Breakfast came and there we were at the as table excited as we could be... the cereal was poured into our bowls, the milk added, we dug in and excitement turned to horror. This was the worst cereal we had ever eaten. Our mother noticed our expressions and asked what was wrong, we told her how nasty it was, she yelled a bit about how much it cost and that we were going to have to eat it before we could get something else. She said it could not be that bad and grabbing my brothers bowl she took a bite... I am not kidding a bit when I say that she gagged just a little. The Freakies went into the trash where they belonged. This was hands down the worst cereal I have ever eaten.

Greatest food humanity has ever invented!!

My second favorite after Cap'n Crunch. It was amazing!

My dad bought a case of Freakies (24 boxes) for all 6 kids to share. I think I ended up eating 18 boxes. A really good cereal.