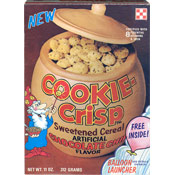 From: Ralston
Introduced in 1977


Originally a Ralston product, this cereal is now available from General Mills.

When the cereal was first introduced, the cereal's mascot announced the cereal like this (on the back of an early box):

"Kanodle, Kazoo and how do you do? I'm Cookie Jarvis with good news for you!

"Remember, kids, a good breakfast consists of juice or fruit, toast with butter or margarine, and Cookie-Crisp cereal."

Company Description: Ralston was originally part of The Ralston-Purina Company which was formed in 1902. The name Ralston stems from a minor social movement in the late 19th Century called Ralstonism - created by Webster Edgerly. Followers of the movement (about 800,000) followed the motto "Regime, Activity, Light, Strength, Temperation, Oxygen and Nature" - the first letters of which spelled out "Ralston"... Read on and see all cereals from Ralston
This cereal belongs to the following Mr Breakfast Cereal Families:
Cookie-Crisp: Chocolate Chip Cereal Theater

Cookie-Crisp Christmas Commerical
Additional Images
These are the most recent images. Click here to see all pictures for Cookie-Crisp: Chocolate Chip. 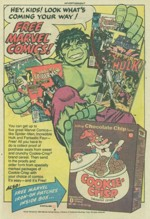 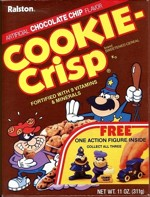 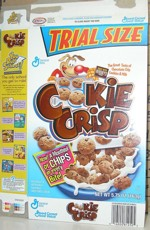 
Upload an image for this cereal
Comments About This Cereal
What do you think of Cookie-Crisp: Chocolate Chip?

This is my favorite tasting cereal but I'm starved about five minutes after eating it.

As stated in a another comment, it is available from General Mills. Ralston, the original manufacturer, went out of business. I can't believe EmptyCanvas is a member...apparently they don't like any of the good cereals lol. I agree with kdj and McFly.... This cereal should be like 2 or 3 on your list of the greatest cereals. It was marketed better and tasted better when Ralston made it. I miss the cop and robber commercials and cereal boxes.

I LOVED this so much as a kid. I can still taste it in my memories. Cereal and cartoons... happy times!

I enjoyed this when it was first released, and I liked the cookie taste, but it was a mouthful to eat!

I wish it actually tasted like chocolate chip cookies. After 1 box I never bought them again. (myemptycanvasreviews.blogspot.com)

#63 (on your list of the top 100 cereals)? This should be least #3! This stuff... man, I would go to our neighbors some days before school just to get this stuff! Heehee!

It doesn't taste nearly as good now. Ralston made the best cereals. The General Mills version is nowhere as good.

This is for vultureboy, they still make them where I live in California. And I eat them everyday.

A decent desert cereal, but it can't stand next to some of the more elusive all-time gems of cereal history (i.e., Monopoly Cereal, Buzz Blasts, etc.)

I loved this cereal! - Wow, nice ethics for the company though, hey? Can't imagine why they went out of business.