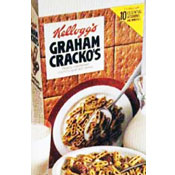 
A magazine ad introducing the cereal described it this way:

New from Kellogg's - the great taste of graham crackers for breakfast.

Almost everyone loves the taste of graham crackers and milk. And now you can have that great taste at breakfast. New Kellogg's Graham Cracko's cereal.

Graham Cracko's are made to stay crunchy in your bowl, on your spoon, and crunchy when you eat it.

The cereal pieces looked like small strips of three intertwining squares. To the insane cereal enthusiast, you could say they looked like 1984's C-3PO's cereal with one of the squares missing.

The cereal was promoted on television by a live-action character named George The Milkman. The ad introducing the cereal began with the jingle, "Something new is coming to town and George The Milkman's bring it 'round." and featured the tag line "like graham crackers made for milk". 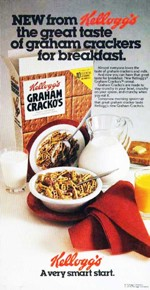 Submitter: Mr Breakfast
Uploaded: 9/24/2008
Additional details
Upload an image for this cereal
Comments About This Cereal
What do you think of Graham Cracko's?

Thank you all for letting me know I am not alone on this one. So I have searched the internet rigorously for a single picture of the box I remember which was white with blue and a picture of a milkman and maybe his truck along with the figure 8 shaped cereal but have not been able to find any trace of it. I did find a good video from Cereal Time TV - Graham Crackos (1978) published Feb 10 2018 which clears up the question of why some people remember the three hole kind and other remember the figure 8 variety. Apparently the figure 8 type was made from 1981 till 1983. I was voter # 262. I agree that this was the best cereal I have ever had and I still look for it on the shelves even after it has been discontinued for 36 years. How crazy is that?

Loved this cereal just as much as you all mentioned. Let us know if it ever comes back.

I've seen discontinued cereals doing a come back the last couple years, French Toast Crunch, Oreo's, etc. Don't know why Kellogg's doesn't bring this back, heck they can eliminate one of the flavored Special K's, or another multi flavored cereal to compensate.

This cereal should make a come back. Whose brilliant (sarcastic) choice was it to take it off the shelves.

I wonder why companies decide to discontinue cereals that we all liked while they keep the same old ones for years and occasionally add different flavors to them them. This one should have stayed around a lot longer.

I NEED Graham Cracko's to come back! I've been craving it for years.

LOVED this cereal as a kid. Also could not remember the name only the milkman. Would like to taste it one more time before I die!

Jointfilms is absolutely correct. They are available in Australia. (I'm from Melbourne). In fact, according to one internet source, it is Australia's 2nd most purchased cereal. (After Sanitarium's Weet Bix). It has been popular since it's launch (late 70's or early 80's here). Don't know whether ours tastes the same, but you could give it a try. You may be able to purchase online, although the postage cost may make it expensive. Nutri Grain is marketed quite differently - As an energy or sports cereal, especially towards teenagers,and sponsors sports (The Iron Man Competition) and we are told that the shape is supposed to represent cricket bats. It is considered a very Aussie thing to eat for breakfast and very much our own, even though we know Kellogg's is a US company. (The power of marketing) It would be interesting to find out in which country it originated in. Check out the TV commercials and the Iron Man competition on youtube. Cheers.