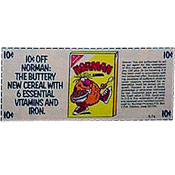 From: Nabisco
Introduced in 1971


Norman's was promoted as "the buttery cereal with 6 essential vitamins and iron." The character Norman appears to be a rip-off of the character GROG from the B.C. comic strip that was popular at the time.

One ad for the cereal described it like this: "Here it is fans... new Norman Cereal! The name is a shame, but the taste is insane. Crunchy balls of goodness with a big, buttery surprise in every crunch... plus essential vitamins and iron. It's from Nabisco. Your kids would love to have Norman for breakfast. And we're not kidding."

We've read reports (no confirmation) that another ad for the cereal used the tagline, "You'll be nuts about Norman!" 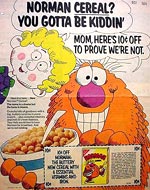 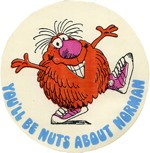 Submitter: Mr Breakfast
Uploaded: 9/23/2008
Additional details
Upload an image for this cereal
Comments About This Cereal
What do you think of Norman?

A buddy and I were talking about cereal from our childhood. He is a little older than me. But he went on and on about Norman. He had me wishing I could have tried it. I also wish someone would post a picture of a Norman cereal box. He has a Birthday coming up and would like to make a Norman T-Shirt for him.

In the lackluster flavor of the day cereals that we have today, PLEASE BRING NORMAN BACK! That butter, hard crunchy cereal was delicious!

I've studied Norman for a while now. There seems to be only one box in a collector's hands. I had spoken to Nabisco and they did not have an archive for Norman Cereal. Norman was 'on the street' between 1974 to 1975 in limited areas. It was NOT in existence in 1971. I have the copyright paper for it which I will upload. If anybody has any info on Norman, please contact me shirts456@aol.com

I adored Norman and even had a Nuts About Norman t-shirt that I wore so much it got so thin - "it only had one side" as my dad would like to say. I, too, am looking for a complete picture of the box and am wondering when they stopped making the cereal. They should bring it back even if only for limited-time-only retro thing. I miss you and your buttery goodness, Norman. :)

I remember it. It was a really tasty cereal!

I've been looking for a picture of the Norman cereal box - on and off since I first got the internet. My brother's name is Norman and I want to make a shirt with the box on it for one his birthdays. Somebody please post a picture of the box. I sure would appreciate it! - Jake

I LOVED Norman! I wish it would make a come-back! Never has there been a cereal flavor like this since the departure of my beloved Norman! Now where can I view a commercial?