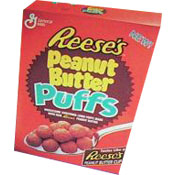 From: General Mills
Introduced in 1994

A magazine ad introducing this cereal in 1994 described it like this:

Introducing the Reese's you can eat with a spoon. 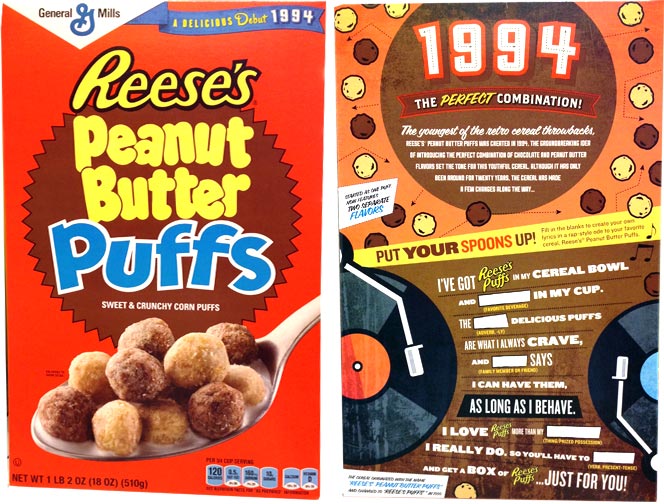 In 2014, General Mills came out with a Retro Cereal Throwback version of the cereal box (above). Text on the back of that box read, "Reese's Peanut Butter Puffs was created in 1994. The groundbreaking idea of introducing the perfect combination of chocolate and peanut butter flavors set the tone for this youthful cereal. Although it has only been around for twenty years, this cereal has made a few changes along the way... started as one puff, now features two separate flavors. The cereal originated with the name 'Reese's Peanut Butter Puffs' and changed to 'Reese's Puffs' in 1999." 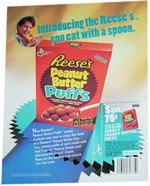 Submitter: Mr Breakfast
Uploaded: 4/1/2008
Additional details
Upload an image for this cereal
Comments About This Cereal
What do you think of Reese's Peanut Butter Puffs?

This was a pretty good cereal. I remember it well.

I can not understand why General Mills would pay so much money to promote Reese's Peanut Butter Puffs with such stupid commercials. Are they directed to individuals with an IQ of 10? What is funny or realistic about someone trying to eat cereal by jamming it through their foreheads or with their tongue stuck to a pole. They are getting too far away from just being a good, enjoyable product, liked by everyone.

When this first came out I liked it, but I thought it was kind of laced or chased by a chemical substrata. Got a box today... excellent! No chemicals, just smooth chocolate flavor and delectable peanut butter just like the 2nd best PB cups out there. (Try a Boyer's PB Cup and You'll understand. ;-) Another Pennsylvania treat!)

This is the cereal that General Mills stole idea from me and my daughter that we sent to them in Feb. 1992. After forging my signature on a release they announced it in Feb. 1994. We campaign against all their products now!

I love Reese's Puff Cereal. It's the perfect combination of chocolate and peanut butter - who knew it would taste this freakin' good! :)

I bought a box and it was stale. I spend almost 4 dollars on the box and had to throw it in the garbage. My daughter does like the cereal but now I don't want to waste my money buying cereal that's no good and Hannafords says it is all the company's fault. Well, I should get my money back or free cereal.

I enjoyed this recently when I was in Canada. Where can I buy some in the U.S. please?

This was my favorite cereal for the longest time and, strangely, I forgot about until I stumbled on this page. Thanks for the cereal memories!

I want some now!