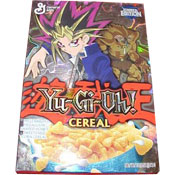 
This limited edition cereal was a tie-in with an animated television series called Yu-Gi-Oh!. From the Japanese, Yu-Gi-Oh! translates roughly to "Game King".

The cereal came in a metallic, holographic box. The honey-sweetened corn puff cereal pieces were shaped like triangles to represent a medallion worn by the TV series character Yugi.

In a press release from August of 2003, Steve Vekich, the marketing manager for promotional cereals at General Mills, was quoted as saying, "We're thrilled to bring Yu-Gi-Oh! to life through our limited edition Yu-Gi-Oh! Cereal. We've captured the essence of Yugi and his favorite monsters in both our cereal and its packaging to deliver a product Yu-Gi-Oh! fans will love."

Submitter: Mr Breakfast
Uploaded: 11/25/2008
Additional details
Upload an image for this cereal
Comments About This Cereal
What do you think of Yu-Gi-Oh!?

Please bring back this cereal for a limited time.

How much would the Limited Edition Box be worth currently?