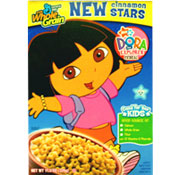 From: General Mills
Introduced in 2006


Dora the Explorer was a cinnamon-flavored, star-shaped cereal - "just like the stars Dora collects on her show".

Dora the Explorer is an animated TV series that debuted on the Nickelodeon cable TV network in 1999. It's lead character, Dora, is an adventurous, bilingual, Latina heroine with a monkey sidekick named Boots. 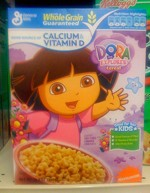 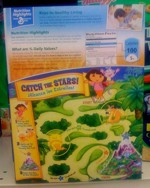 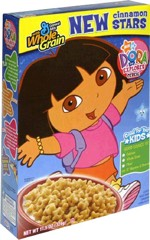 Submitter: Mr Breakfast
Uploaded: 10/12/2008
Additional details
Upload an image for this cereal
Comments About This Cereal
What do you think of Dora The Explorer?

I work at a childcare center, and this cereal is on the federal food program's very short list of cereals that can be served. Problem is, I cannot find it to purchase in bulk from any of our grocery companies... Anyone know of any?

I don't think you can find it at stores anymore.

Where can I find this and the Diego General Mills cereal? I have been trying to find these for my two year old daughter and haven't had any luck unless I order online.

My granddaughters like to snack on this cereal without milk. I keep snack size bags filled for when they come over.

I picked 2 boxes of this up at a Grocery Outlet for $2 a box not too long ago. I was surprised to find it tasted alright. It has a lightly sweet taste that reminds me of sopapillas. I eat it in ice cream and especially yogurt, too.

My 2.5 year old granddaughter would not eat her Dora cereal when I fixed it for her. I asked her, "Why aren't you eating your cereal K?" She responded, "Let Dora eat it."

Yes. You can get it at Walmart, as of April 2012 (which was when I got my first box). It's awesome cereal. Tastes good. Not too sugary. It has cinnamon (just a bit). It only uses corn and rice for its grains. The cereal bits are small (so they stay in the bowl). They don't get too soggy, but they won't hurt your gums. There's a lot of cereal per box. I hope this stuff stays around for a long time. I prefer it to Kix, currently.

Dora is not my favorite Blues Clues - but her cereal is okay.

My daughter LOVES Dora. Is this still being made? I would love to get her some.

I use to love Dora when I was younger. Hola - my name is Coolie.