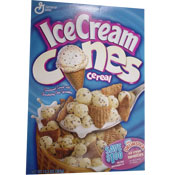 
Ice Cream Cones cereal was available in two flavors: vanilla and chocolate chip. The cereals consisted of ice cream cone-shaped conical pieces and round Kix-esque pieces intended to resemble scoops of ice cream. If a cereal eater was so inclined, the scoop pieces actually fit comfortably on the cone pieces to create a tiny ice cream cone replica.


General Mills briefly reintroduced Ice Cream Cones Cereal in 2003 to celebrate the 100th anniversary of the first ice cream cone. According to Tommy Hillman, an associate marketing manager for the company at the time, "Ice cream cones have such a great connection with happy, carefree times. We're excited to offer a cereal that provides a fun new way to experience ice cream cones."

The first box of Ice Cream Cones Chocolate Chip Cereal described itself like this:

"New Ice Cream Cones Cereal looks and tastes like ice cream cones! Chocolate Chip-flavored cereal scoops and crunchy cones bring the fun and great flavor of ice cream to your cereal bowl. You'll like it! And with the goodness of natural grains and added vitamins, mom will like it, too! Also available in great-tasting vanilla flavor."

Submitter: jeffrey
Uploaded: 10/14/2010
Additional details
Upload an image for this cereal
Comments About This Cereal
What do you think of Ice Cream Cones - Chocolate Chip?

I still have passionate dreams of this cereal. Is that wrong?

Oh they really need to bring this back. This was one of my top 3 favorite cereals.

I always loved this cereal. Mmmmmm. Please. Bring it back.

I never saw this cereal in the grocery store, but the idea of ice cream cone shaped cereal pieces is brilliant.

Heres the link to all 3 Ice Cream Cone commercials. That song he sings is so catchy.

Bring this cereal back now. It's better than crack.

This Box Needs 2 be on shelves ASAP!