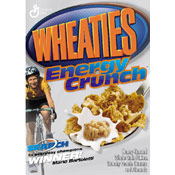 From: General Mills
Introduced in 2002


"The Breakfast of Everyday Champions"

This cereal was Wheaties effort to bring "the breakfast of champions" to a local level. In mid-2001, General Mills began a search for an everyday champion from each of the 50 states. From that selection, they would narrow the field to 6 finalists - one of whom would appear on the front of the new cereal box.

An article in the July 9, 2001 issue of the Pittsburgh Post Gazette previewed the cereal:

Get on a Wheaties box

For 75 years, Wheaties has featured the pictures of American sports icons on its cereal box to emphasize its role as "The Breakfast of Champions".

Now everyday champions will have a chance to get their picture on a Wheaties box, too. General Mills is rolling out the Wheaties Energy Crunch Cereal, which will honor a champion from each state.

Individuals can nominate themselves or others by submitting an essay up to 300 words. Entries will be judged on how this individual lives a balanced life while achieving compelling athletic accomplishments and outstanding volunteer service and originality.


The winner of champion search was Marie Bartoletti of Finleyville, Pennsylvania, a 44-year-old marathon runner, tri-athlete and mother of two.

The cereal itself was described as a "delicious mix of honey-toasted whole-grain flakes, crunchy protein clusters and almonds." 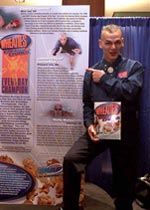 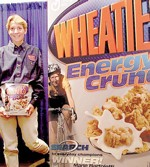 Submitter: Mr Breakfast
Uploaded: 11/20/2008
Additional details
Upload an image for this cereal
Comments About This Cereal
What do you think of Wheaties Energy Crunch?

Getting pretty sick of Wheaties Energy Crunch getting the hard shaft if you know what I mean.

Somebody is playing games again. There should be more votes Wheaties Energy Crunch. This cereal is getting ripped off. I voted faithfully once everyday to get that total and now this. SHAME on the person who is doing this.

Where can I buy this cereal? I have not seen it for years.

Please review vote tally? There was I believe 710 vote or more as of yesterday and now reduced to 649? I vote faithfully once a day now for a whie maybe a couple of years. if this continues I will cease to vote any more and withdraw from viewing this site anymore. Please review. Thank You! Cereal Kid.

Please check this out. It's an article about Everyday Champions on Wheaties Energy Crunch. This is the link: http://www.emailwire.com/release/Wheaties-Energy-Crunch-Announces-Everyday-Champions-to-Appear-On-Box.html - Thanks, Cereal Kid

Thanks Alot! Keep up the Good work Mr. Breakfast and for having this Fantastic site! Cereal is COOL! It's my favoriote isle in the Supermarket!!!

Hey Cereal Kid - That was our fault. I think you were looking at the page during a database update last night. Totals should be correct again. Sorry about that.

Somebody is playing games again. There should be a total of 173 vote for Wheaties Energy Crunch and someone reverted it back to 120??? If you do the math it was 53 days ago (1 vote per day)added to 120 = 173. Now there is a total of 151 when there should be 173? This happen before and this cereal is getting ripped off big time. WHY????? Because some will say that there was multiple votes? GABAGE! I voted faithfully once everyday to get that total and now this. SHAME on the person who is doing this. Cereal Kid!

It's my favorite cereal!! But they don't sell it here anymore. Where can I get some? Help, please. I live in Thibodaux, Lousiana 70301.

Hi Cereal Kid - Sorry, but when we did your nightly check, we found that one individual voted 100 times for Energy Crunch. Since it's specified only one vote per user per cereal per day, we had to check our logs and remove the multiple votes. No fix on our end. Just trying to fix fixes as we see them happening.