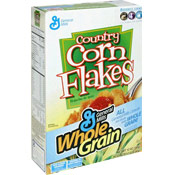 From: General Mills
Introduced in 1962


Promoted as "double-toasted, double-crisp and good", Country Corn Flakes was a General Mills response to the wild popularity of Kellogg's Corn Flakes. It was made primarily of corn meal, rice, sugar, salt and malt syrup.

According to a 1961 magazine ad, these flakes were "better than any corn flakes you ever ate!!! The secret: Just a touch of rice makes these flakes taste better. Extra tasty, extra toasty. If you don't think so, we'll buy 'em back."

According to the book "Cerealizing America" by Scott Bruce and Bill Crawford, taste tests of the new cereal showed it was lighter, sweeter and much crisper than Kellogg's flakes.

Kellogg's countered the challenge by the seemingly-better cereal with a promotional drive to position their Corn Flakes as "corniest cornflakes" of all corn flakes. 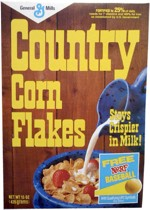 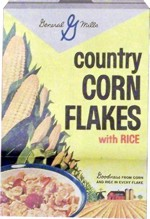 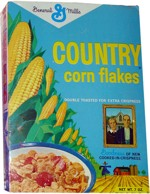 Submitter: DeeJay
Uploaded: 9/23/2008
Additional details
Upload an image for this cereal
Comments About This Cereal
What do you think of Country Corn Flakes?

I didn't eat the cereal but I did love the commercial.

Restore this product back into our stores. And use the American Gothic commercial on TV and put that picture on the cereal box in front.

I love this cereal. The only corn flakes that don't get soggy. Lived in IL. In the 90s, moved to NV and one of my many favorites that none of the stores carried. I've moved back to IL and have looked everywhere for my favorite cereal. Bring it back. Please.

I can still sing the Country Corn Flakes jingle from the 1960s. Insanely catchy.

I want these back in Arkansas and Texas! Bring them back! Please!

I had a heart attack and they served Country Corn Flakes for breakfast in the hospital. When I got out I tried to buy it in the store but can''t find it. Bring it back. It's the best I have ever had.

Please start selling these Country Corn Flakes in stores again. It's one of the all-time great cereals.

By I Miss Them

Country Corn Flakes is the best Corn Flake cereal that I have ever tested and I would love to buy them again. Put it back on the shelves! Where can I get some?