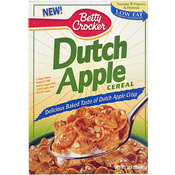 
This cereal from General Mill's Betty Crocker brand was promoted on the box as being "low fat" with the "delicious baked taste of Dutch apple crisp".

General Mills introduced another Betty Crocker cereal at the same time this cereal came out. It was called Cinnamon Streusel. A double-pack which contained packets of both cereals was available for a short time. 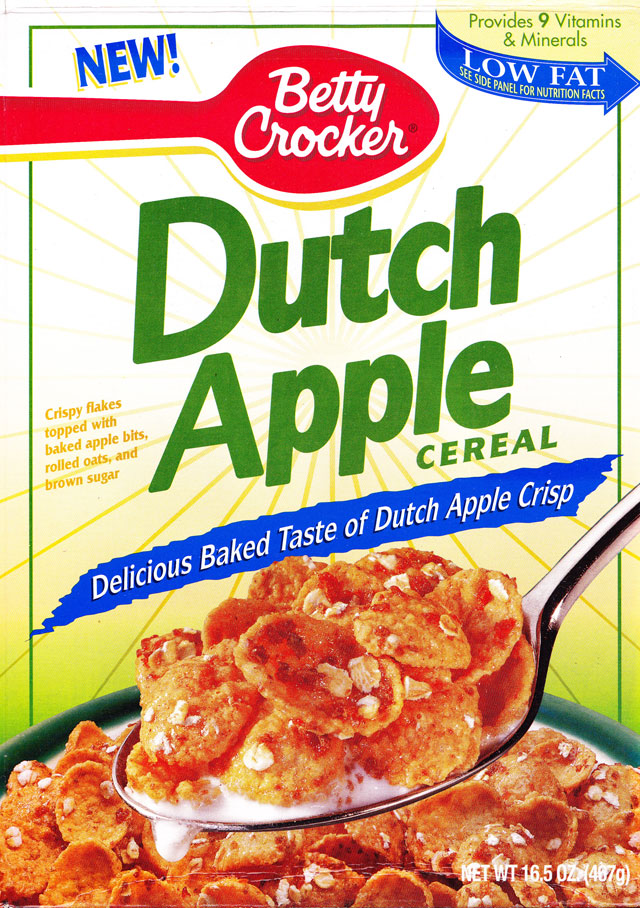 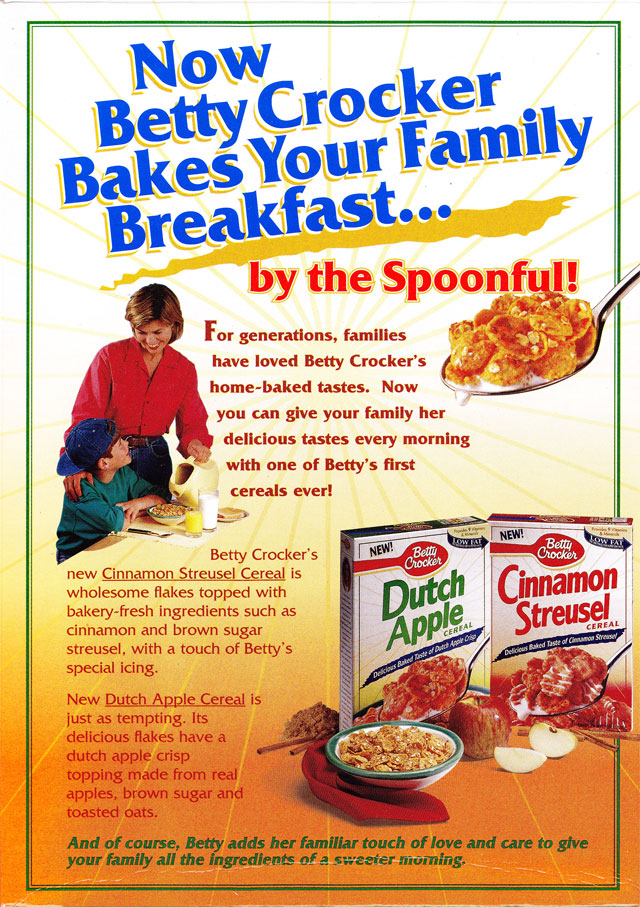 The following description of both Betty Crocker cereals appeared on the back of both cereals' boxes when the products first appeared:

Now Betty Crocker Bakes Your Family Breakfast... by the Spoonful!

For generations, families have loved Betty Crocker's home-baked tastes. Now you can give your family her delicious tastes every morning with one of Betty's first cereals ever!

New Dutch Apple Cereal is just as tempting. Its delicious flakes have a dutch apple crisp topping made from real apples, brown sugar and toasted oats.

And of course, Betty adds her familiar touch of love and care to give your family all the ingredients of a sweeter morning.

Upload an image for this cereal
Comments About This Cereal
What do you think of Dutch Apple?

General Mills created the best tasting cereal EVER with Dutch Apple. Amazing taste. Perfectly toasted. Just an incredible recipe. Where General Mills went wrong was branding it as "Betty Crocker." A real marketing misstep. In 1996, no one was willing to embrace "Betty Crocker" as a new cereal brand. In 2012, this amazing forgotten recipe could have a second life if they made it a brand extension, like Total Apple Crisp or Fiber One Dutch Apple, some brand with an already established customer base. It's a shame Dutch Apple came and went so quickly. When it suddenly stopped appearing on shelves in 1997, I knew immediately it had been discontinued so I went around to various grocery stores buying the last 6 boxes I could find. I wrote General Mills an appeal, and they actually wrote back apologizing and saying it was discontinued because the cereal never found its audience. Well, it never found its audience because it was marketed as "Betty Crocker", not because it wasn't an amazing product. Maybe someone from General Mills will see this and get the idea. Your test labs came up with a winner in 1996. You can re-brand and reintroduce this amazing recipe. Bring it back as an "taste" extension of an established brand. You do that, and I bet the sales results would be different this time!