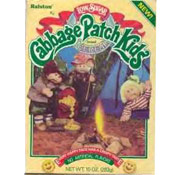 
According to a 1985 magazine ad, "New Cabbage Patch Kids brand Cereal is the one cereal both moms and kids can feel good about. Because we took the fun and fantasy of Cabbage Patch, turned it into a delicious taste that kids love and then made it low in sugar!"

The cereal was actually low in sugar at 3 grams per serving. The cereal pieces looked liked fat little round smiling faces, reminiscent of the fat faces on Cabbage Patch Dolls.

There were multiple boxes made for the cereal featuring Cabbage Patch Kids Dolls photographed in different positions and scenes, including dolls eating cereal, camping and swinging on a porch swing.

The complete jingle from the television commercial for the cereal went as follows:

Cabbage Patch Kids dolls were created by Xavier Roberts in 1978. By 1982, they were being mass-produced by toy manufacturer Coleco. The chubby dolls were generating over $2 billion in retail sales by 1984. 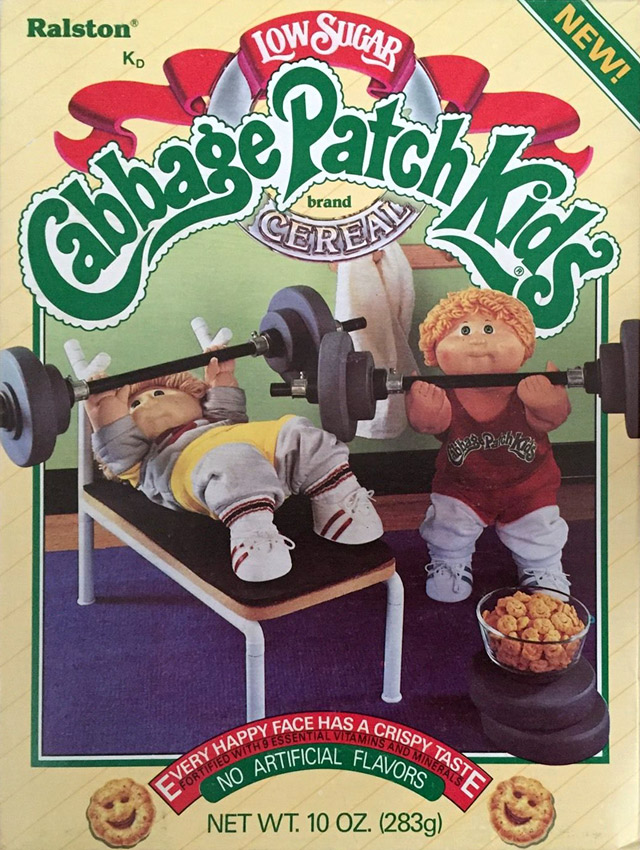 The first 6 ingredients listed on the box in 1985 were rice flour, sugar, malt syrup, salt, reduced iron and caramel color.

click to enlarge
Cabbage Patch Kids (On A Swing) Box 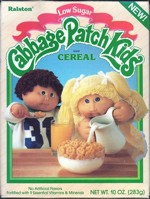 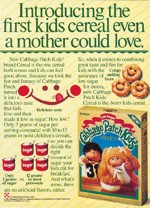 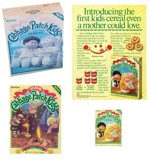 Submitter: Mr Breakfast
Uploaded: 3/18/2008
Additional details
Upload an image for this cereal
Comments About This Cereal
What do you think of Cabbage Patch Kids?

I recall my sister begging for it and not enjoying it. I recall it wasn't that great, kinda bland.

I can still remember what this tasted like. After years of trying to find something comparable I figured out that it's just Honey Combs.

Great stuff. My daughter would love it if it came out again.

Here's a video of my sisters fighting over the Cabbage Patch Kids cereal in 1985.

I had the dolls and the cereal. I remember it being pretty good. Thanks for the memories!

Oooo I forgot about this stuff! It was one of the few "sugary" cereals my parents would actually let us have.

For some reason I remember this cereal being the first cereal to use NutraSweet?

I enjoyed the cereal but really loved the dolls. I had a cabbage doll when I was 8 years old and I would have hurt someone back then if they even thought about touching my doll. The cereal was o.k. Cabbage cereal is longer made is that correct?

I used to LOVE this cereal in the 2nd grade. My teacher brought it for us to use for math games, and we had to try not to eat it along the way or else no more addition and subtraction. Have no idea what it would taste like now, but I remember it being sweet and yummy! And I was never a fan of those super-sugary, radioactive cereals anyway.

Blehh! I don't know how I even GOT my hands on THIS cereal, as I hated the cabbage patch kids back then! *lol* Garbage Pail Kids, on the other hand? Yes PLEASE! *LOL* But a big 'no thank you' to this cereal! Think of Kix cereal, with the same bland, boring flavor(with such little sweetness you're wondering which has more sugar, the cereal itself, or the lactose in the milk?)but with cuter, more pleasing happy face shapes and you've got cabbage patch kids cereal. I say good riddance to it. Trust me, you're not missing anything.