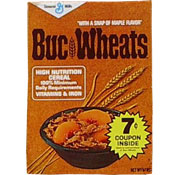 
According to cereal boxes from the 1970's, Buc Wheats cereal was a "high nutrition cereal (with) 100% minimum daily requirements (for) vitamins and iron... with stoneground buckwheat... (and) a snap of maple flavor".

Using achieved grocery store circulars, MrBreakfast.com has been able to prove this cereal was in existence as early as 1971 and as late as 1983.

Those who remember the cereal have said the following:

"Buc-Wheats cereal was pretty much corn flakes mixed with the dark buckwheat. Essentially, they looked like bran flakes as far as color, but they were lighter more like corn flakes. Here was the kicker, instead of being covered with powdered sugar as like Frosted Flakes, they were coated with a Maple Syrup glaze, which really enhanced the flavor of the flake."

"Kinda like dark colored Frosted Flakes, but they were glazed with sugar, instead of covered in powdered sugar. They were more wheat flavored, and quite yummy."

"When they had enough glaze that sometimes they'd stick together in a huge lump in the box."

There are conflicting reports that the cereal may have been originally produced by the Ralston Purina Company. Most of these accounts infer that the the cereal traded hands when General Mills purchased Ralston's cereal line. Since this event took place in 1994 long after Buc Wheats had disappeared from grocery store shelves, it is unlikely that Ralston originally produced the cereal.

It's known that television commercials with the following plot lines were produced for the cereal: 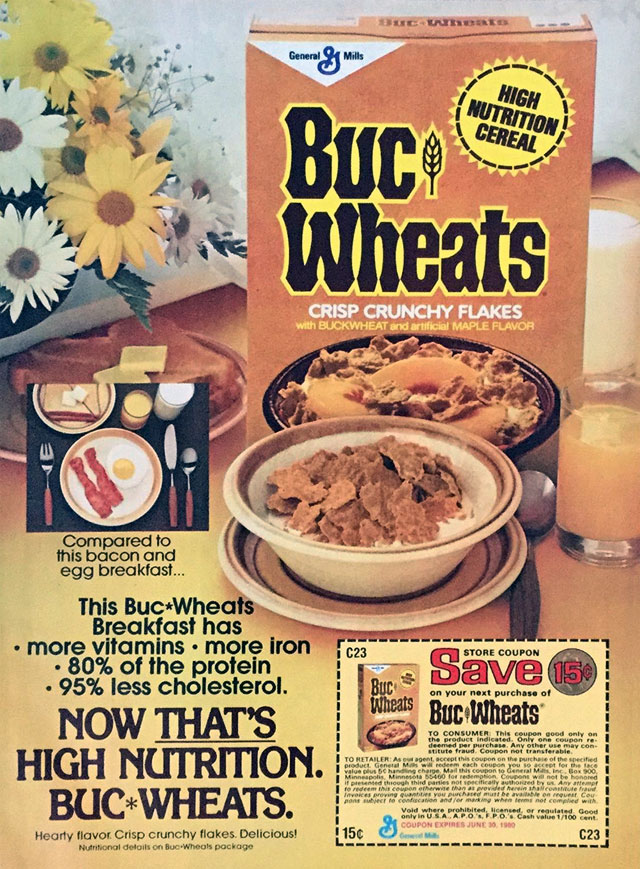 Late in the production of the cereal, General Mills replaced the maple glaze with a honey coating. Fans of the original version were united in feeling that Buc Wheats had lost its magic. The new version was said to taste like a sweet and sticky bowl of Wheaties. 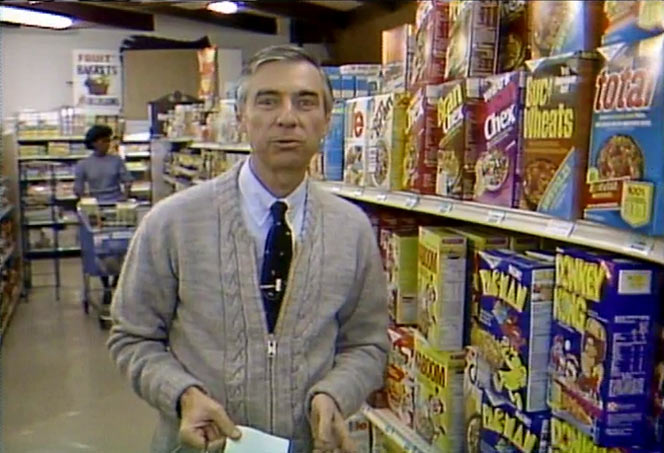 In a 1984 episode (#1529) of Mr. Rogers' Neighborhood, Mr. Rogers takes a trip down the cereal aisle where you can see Buc Wheats Cereal along with other discontinued favorites like Pac-Man Cereal and Donkey Kong Cereal. 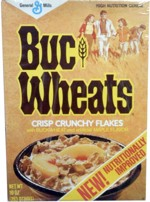 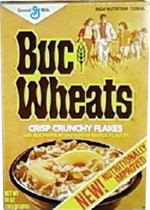 Submitter: Mr Breakfast
Uploaded: 3/13/2008
Additional details
Upload an image for this cereal
Comments About This Cereal
What do you think of Buc Wheats?

Born and raised on a dairy farm in Northeast VT and this was a staple for breakfast after chores. I now just pour maple syrup on Wheaties.

My grandparents bought this cereal all the time and I always loved it. Wish they still made it.

Buc Wheats was discontinued because General Mills changed from Maple coating to coating them with Honey and people didn't like them without the Maple.So, due to low sales, they discontinued them. It had NOTHING to do with Racism.

Bring back the original maple version!

I also am devastated that this cereal was discontinued. Please bring it back.

I loved Buckwheats as a kid and my wife bought them for me after we got married. I still mourn the loss of Buckwheats. If General Mills quit making them over racism, I protest. Buckwheats were the best cereal ever. They were hardy and tasty.

Loved these. They were part of the WIC food program in VT when I was young and we got them through that.

Please bring them back! I, too, still check out the cereal aisle hoping one day to see them again. Always disappointed! Racist? Change the name and only let the original fans know so we can buy all the boxes!

I just read a web page stating that Buc Wheats was discontinued in 1984, which is not true. I was living in Daly City CA in 1987-88, and was able to purchase this cereal locally. Best cereal I've ever tasted. Very disappointed when I could no longer purchase. Still am.

Buc Wheats Cereal was awesome! I used to stop in other States looking for it when I couldn't find it locally.