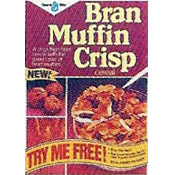 From: General Mills
Introduced in 1985


We know that a television commercial for this cereal aired during the CBS Evening News on Wednesday, Jun 12, 1985... beyond that, we know nothing, zip, zilch, zero...

If you have any information or additional images of this cereal, please post below.

Submitter: Diana Moore
Uploaded: 6/7/2010
Additional details
Upload an image for this cereal
Comments About This Cereal
What do you think of Bran Muffin Crisp?

Here just because this cereal is in the movie Manhunter.

One of my favorite cereals, GM's Bran Muffin Crisp was discontinued in 1989. To this date, I remember by disappointment.

That is so funny. I was watching Manhunter, and was drawn in as the hero strolled past vintage 1986 cereal boxes. Saw my now defunct all time favorite, Fruit and Fiber, (tropical fruit variety), on the shelf. Then I spotted THIS oddball, "Bran Muffin Crisp". I knew it must be a fad product, long out of production. Bran Muffin Crisp. What were they thinking?

Too funny. I just looked it up because I saw it in between known cereals in a scene in the movie Manhunter! LOL

I think I remember this one. Admittedly, I might be thinking of a different cereal, but if I'm right, it had sort of a brown sugar and cinnamon flavor and a heavy bran texture. It was okay but not great.

Movie Manhunter, box is in movie scene about 1 hour 10 minutes in the movie.