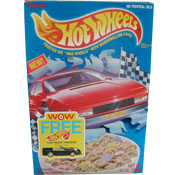 
This cereal was described on the box as "Hot Wheels Frosted Oat Mag Wheels With Marshmallow Cars". It was introduced in 1990 about the same time Ralston came out with The Jetsons cereal.

Each box of Hot Wheels cereal featured an illustration of sports car driving toward a bowl of cereal, and a FREE Hot Wheels car right in the box.

Submitter: Mr Breakfast
Uploaded: 10/1/2008
Additional details
Upload an image for this cereal
Comments About This Cereal
What do you think of Hot Wheels?

When this cereal was discontinued, my son was very sad.

I just remember the commercials! This was awesome!

A real HOT WHEELS car was in every single box. That saved the families a little money too!

My god I miss this cereal. I remember I used to make my mom buy 2 of them. Best cereal growing up. They should bring this back! OMG I miss the early and mid 90s!!!!!!!!

I loved this cereal as a kid - I had (and still have) a huge Hot Wheels / Matchbox car collection. The cereal was good, much like Lucky Charms, and of course it came with a toy car in every box.

As I remember, the toy cars that came in the box of this cereal were not actual Hot Wheels, but cheaper "unbranded" toys. Still, one of my favorite scale cars - an unbranded greenish-blue Lamborghini Miura came from this cereal. I still have it to this day.