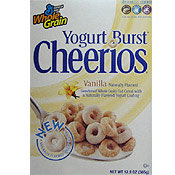 From: General Mills
Introduced in 2006


This Cheerios cereal was described on the box as a "sweetened whole grain oat cereal with a naturally flavored yogurt coating." It included Cheerios covered in a creamy yogurt coating and also plain Cheerios pieces with no coating.

This cereal has been discontinued. A strawberry version of Yogurt Burst Cheerios was still available as of 2011.

Yogurt Burst Cheerios - Vanilla Cereal has been reviewed on MrBreakfast.com.

Click here to read the review.
Upload an image for this cereal
Comments About This Cereal
What do you think of Yogurt Burst Cheerios - Vanilla?

It was my all time favorite cereal. Still waiting for its return. I'll stick with the honey nut flavor until then.

It was the best and I miss it all time.

When mixed with Strawberry Yogurt Cheerios, this cereal was amazing!

I think the biggest mistake they made was adding the word "yogurt" in the title since the only thing yogurty about them was their color. They were basically just plain cheerios with a coating of vanilla icing on them, sounds nasty but they were delicious.

Please bring this cereal back. It was my favorite kind of Cheerios and maybe my favorite cereal ever.

This was my favorite cereal. To this day, I always go in the cereal isle to look for it. It disappoints me everytime. This was my favorite cereal. It was the only cereal my mother had to buy two of in order to last me through the week. She even bought me a cereal dispenser because I ate so much of that cereal. But after it left... it wasn't the same. Please bring this back!

PLEASE BRING THIS BACK! Vanilla Yogurt Burst Cheerios was the best cereal ever!

Best cereal ever! They need to bring it back now!

This is my favorite cheerios, I love it more than anything else - the yogurty vanilla cheerios taste like a sour banana to me... mmmm!

I can't find this cereal in any of my local grocery stores nor online. I like this a lot more than Honey Nut Cheerios, so I'm really disappointed about that...