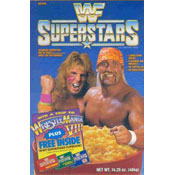 
While it looks like "WF" at the top of the box, that's actually the logo for "WWF" (The Word Wrestling Federation) - one of the "W"s is inside the other.

The boxes for this cereal featured some of the most famous wrestlers on the circuit in 1991, including Hulk Hogan, the Ultimate Warrior and the Road Warriors - Animal and Hawk. 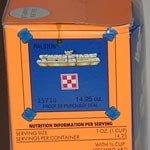 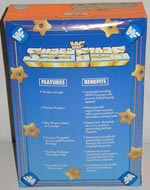 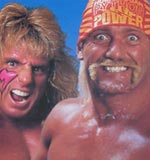 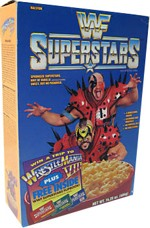 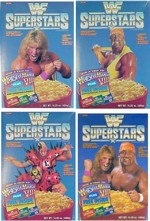 Submitter: Mr Breakfast
Uploaded: 6/3/2008
Additional details
Upload an image for this cereal
Comments About This Cereal
What do you think of WWF Superstars?

I really loved this cereal. I hope they bring it back to stores.

Mine came with a little flip book of Ultimate Warrior going rope to rope and giving Andre The Giant a big splash. Pretty awesome. The cereal, however, defiantly tasted like it was made by Purina.

They seriously - back in the day - needed Mr. Perfect on the box, then it would have been the "Perfect" cereal. Add Bobby Heenan and Flair too. Other than that... epic cereal munchage. Bring it and Crunch Tators BACK.

Bring the WWF Superstars cereal back. It was really good. Add a new picture of Hulk Hogan with new wrestlers, but call it WWE Superstars with the same background.

Those two (on the box) are the Road Warriors - Animal and Hawk. Later in their career, this would be the WWF days, they started calling themselves the Legion Of Doom. Their signature move was called the Doomsday Device.

I saw a box of this with the cereal still in it at the flea market awhile back with the Legion of Doom on the front. It was in near-new condition. I think it was going for $40. Is it really worth that much? - Jon Barnes, Fairfield, CT