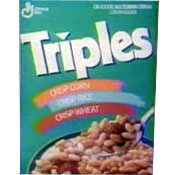 From: General Mills
Introduced in 1991


According to a television commercial, Triples had "tasty rice crisps, hearty wheat crisps and sunny corn crisps for taste that could have you doing a triple-take."

The cereal was heavily promoted as a replacement for Kellogg's Rice Krispies with lines like "if you like Rice Krispies, try Triples". 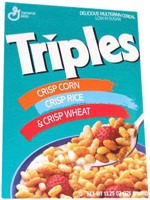 Submitter: Mr Breakfast
Uploaded: 4/19/2009
Additional details
Upload an image for this cereal
Comments About This Cereal
What do you think of Triples?

My cousin was part of the team that created Triples; we got sent a box at some point in the development process - it was probably after it was already test marketing in some part of the country, as it looked like a finished product. I remember, as a pre-teen or early teenager, telling my mom "this tastes like stale rice krispies," and that first version was definitely aimed at grownups ("yuppie-chow.") By the time the product was available in NY on retail shelves, they'd added some more sugar, and it tasted OK.

I bet General Mills could bring back Triples sooner or later.

Could someone make a petition @ change.org to bring back Triples cereal from the dead?

This was a great tasting cereal.

I have 4 coupons with no expiration dates. Bring Triples back General Mills!

I loved Triples too! Bring it back please!

Found a recipe from the Triples cereal box GM used to make... Peanut Butter-Chocolate squares. This was a favorite with my son. I was wondering what cereal would be the best to make it with today since GM doesn't make Triples today.

This was my favorite cereal growing up. I remembered it when I just bought a box of 'Crispy Rice' by 'American Breakfast' from Dollar Tree. It has the same level of sweetness and same texture, but it doesn't have the other two grains. I'd love it if someone would make Triples again.

Triples was great until they 'improved' it. Before General Mills stopped making it, they kind of ruined it by making it more air puffed. It wasn't as crispy as it had been and I stopped eating it.