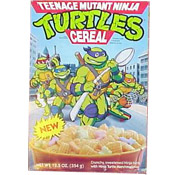 
When introduced, this cereal was described on the box as "crunchy, sweetened 'ninja nets' with 'ninja turtle' marshmallows". Pizza-shaped marshmallows were later added. The "ninja net" cereal pieces looked very much like Chex cereal pieces. 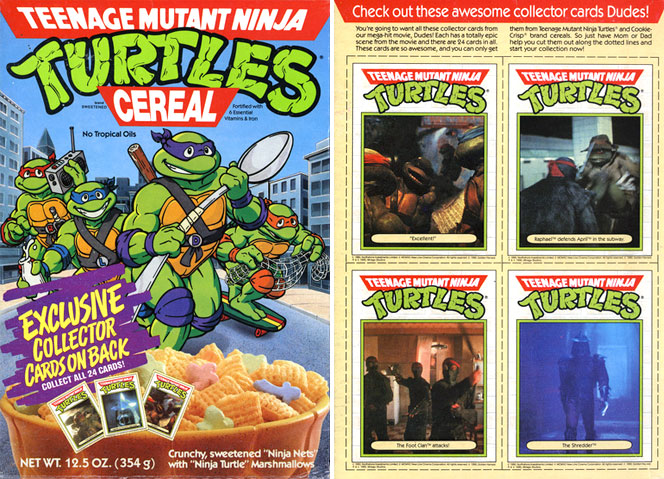 Company Description: Ralston was originally part of The Ralston-Purina Company which was formed in 1902. The name Ralston stems from a minor social movement in the late 19th Century called Ralstonism - created by Webster Edgerly. Followers of the movement (about 800,000) followed the motto "Regime, Activity, Light, Strength, Temperation, Oxygen and Nature" - the first letters of which spelled out "Ralston"... Read on and see all cereals from Ralston
This cereal belongs to the following Mr Breakfast Cereal Families:
Teenage Mutant Ninja Turtles (1989) Cereal Theater 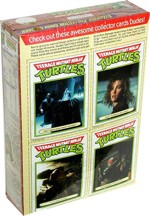 Submitter: Pepper
Uploaded: 7/30/2009
Additional details
Upload an image for this cereal
Comments About This Cereal
What do you think of Teenage Mutant Ninja Turtles (1989)?

I grew up a massive Teenage Mutant Ninja Turtles fan. And at 37 in 2020, I'm still a massive fan. Even sporting a Raphael tattoo. So naturally I wanted this cereal and I can still remember loving this cereal. Sadly I don't have the turtle bowls that came with some boxes anymore.

I loved Teenage Mutant Ninja Turtles and the cereal.

The Teenage Mutant Ninja Turtles cereal was so awesome. I've had it since I was seven back in 1989 and my favorite Ninja Turtle happens to be Leonardo. He knows how to lead the Ninja Turtles and he's a great and brave swordsman and they know how to take down the shredder, the foot soldiers and evil mutants that would attack the city.

I was a massive TMNT fan, back when this came out, but even that couldn't get me to eat more than one box of this stuff. It was literally just a mediocre Rice Chex knockoff, with marshmallows. It wasn't bad, but it certainly wasn't anything to write home about, either. Thoroughly average.

It was a great concept for a cereal but had a terrible flaw in the final product. It was similar to Rice Chex cereal but with sweetness added and typical cereal marshmallows you'd find in Lucky Charms. However, the rice cereal would very quickly adsorb the milk, causing the cereal to fall apart, leaving you with a soggy mushy mess. It was okay if you could eat it very quickly in small portions.

I never tried it. I have an unopened sealed box of TMNT cereal from 1990 but I don't really want to open it now in 2018.

I wish I could eat it again. It's my favorite cereal EVER.

My FAVORITE tasting cereal. I was born in 78, child of 80s cartoons, dozens of great cereals, but when this came out, the taste was actually awesome - often I pretended to like cereals because it had my favorite cartoon characters on it (looking at you Real Ghostbusters) but this cereal was fabulous. I don't care it was essentially this, or a rip-off o this, or whatever - I just remember my mouth watering thinking about having a bowl. So good!